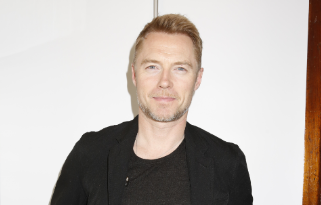 Ronan Keating has posted a new picture of his gorgeous son Cooper as they enjoy a father and son golf day, and it’s just too cute for words!

In the black and white image posted to his Instagram page, doting dad Ronan can be seen teaching one-year-old Cooper how to swing a golf club, while the tot holds onto his own teeny little golf club.

Fans couldn’t help but fawn over the photograph, and some even joked that Cooper could be a better golf player than his dad before long!

“When he ends up a better player you might regret that, haha!” joked one follower.

Other fans were quick to admire the little fashionista’s sense of style.

Wearing a jacket and mini Ugg boots, the tot is well on his way to becoming a trend-setter!

Ronan’s day relaxing with his son comes after yesterday’s announcement that Boyzone would be splitting after 25 years together.

They’ll call time on their incredible career after their upcoming album and tour.

And what better way to distract yourself?

One fan, however, quiet rightly pointed out that Cooper should be following in his dad’s footsteps and picking up a microphone.

Cooper is Ronan’s first child with wife of three years, Storm, while he also has three children – Jack, 19, Missy, 17, and Ali, 12 – with his ex-wife, Yvonne Connelly.

Writing a sweet tribute to his son on his first birthday last weekend, Ronan praised Cooper for having “a heart of gold and the personality I could only dream of.”

He wrote on Instagram: “My youngest is one today. What a legend this little man is. Never have I known a child to smile so much and mean it like this fella.

“A heart of gold and the personality I could only dream of, I owe all of this to my Stormy. It’s her heart and soul that makes Coops the boy he is. I’m one lucky man to have four incredible children.

“Happy Birthday monkey. You are everything. So much love from all of us.”