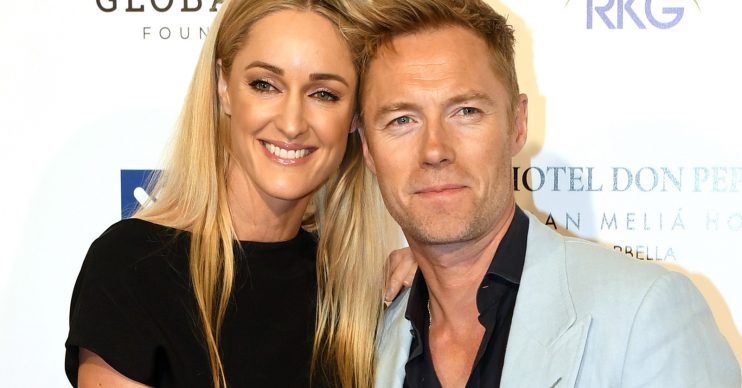 She is just seven days old

Ronan Keating and his wife Storm have shared some unbelievably cute pictures of their newborn Coco.

Their daughter is seen snuggling up to her brother, Cooper – and the happy couple revealed how he is coping with the new arrival.

She then shared a series of hashtags which speak for themselves.

“She is already asking for pocket money.”

A week earlier, the Australian designer posted a picture of Coco in her arms, thanking staff at the Portland Hospital where she was born.

She said it had been a “beautiful, calm birth”.

A beautiful calm birth thanks to Claire Mellon and all the wonderful team at @theportlandhosp Thank you so much for taking such great care of us ♥️ Coco Knox Keating, born 27.03.20 #myheartcouldburst #ourlittlegirl @rokeating

Ever the joker, Ronan shared his own snap of Coco as a newborn in his arms.

“A week ago today. Wow time flies she is already asking for pocket money,” he wrote.

He was still in hospital scrubs in the picture.

A week ago today. Wow time flies she is already asking for pocket money.

Baby Coco Knox Keating was born on Friday, March 27. She is the second of Ronan’s children with Storm.

‘It was so quiet’

Days after the birth, Ronan called into his Magic FM show to tell listeners and co-host Harriet Scott all about the birth.

While it may have been calm, the coronavirus pandemic made it far from typical.

He said: “It was obviously very strange, because nobody could come into the hospital.

“It was just Storm and myself and little Coco in lockdown in the hospital.

“The nurses were amazing, the staff were brilliant. But it was just so different, it was so quiet. Which was kind of nice in a way. We had all of that time just to ourselves. Cooper couldn’t come in, his other brothers and sisters couldn’t come. So it was a strange one. It was very different and lovely.”

We are glad to see that Cooper is bonding with his little sister now just fine.

What did you think of this story? Head to our Facebook page @EntertainmentDailyfix and leave a comment to let us know your thoughts.