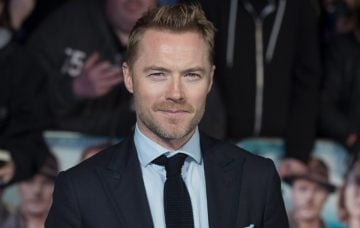 It's the ninth anniversary of his death

Ronan Keating and his fellow Boyzone members have paid tribute to their late bandmate Stephen Gately on the ninth anniversary of his death.

Stephen was just 33 years old when he passed away from natural causes in October 2009.

Taking to Instagram on Wednesday, Ronan shared a photo of his tattoo tribute to Stephen which consists of a Superman ‘S’ along with the numbers 76 and 09, which signifies Stephen’s year of birth and the year when he died.

I hear your laugh every day bro. That wicked sense of humour still gets me through . Thank you for the friendship. Can’t believe 9 years have passed. Miss ya Bro your song will last forever. #Wingman #Brothers #Love

Ronan, 41, wrote: “I hear your laugh every day bro. That wicked sense of humour still gets me through. Thank you for the friendship.

Keith also took to Instagram to share a string of throwback snaps of himself and Stephen from their youth.

He wrote: “There’s not a day goes by where I don’t remember a wonderful memory of times spent with this beautiful beautiful man. I miss you Steo.”

Meanwhile, Shane shared a snap of himself and Stephen alongside a heartfelt caption.

He said: “When someone you love becomes a memory, the memory becomes a treasure.”

Stephen was found dead in his Majorcan home in October 2009.

His cause of death was ruled as pulmonary oedema, caused by a build up of fluid on the lungs.

After Stephen’s death, they released an album in 2010 called Brother in tribute to him.

The band are set to release their final album, Thank You and Goodnight, on November 16 and one of the tracks, I Can Dream, features vocals recorded by Stephen between 2002 and 2003.

Ronan, Keith, Mikey and Shane are marking 25 years as a band and will head on a farewell tour next year.

Are you going to watch Boyzone on their farewell tour? Leave us a comment on our Facebook page @EntertainmentDailyFix and let us know what you think.