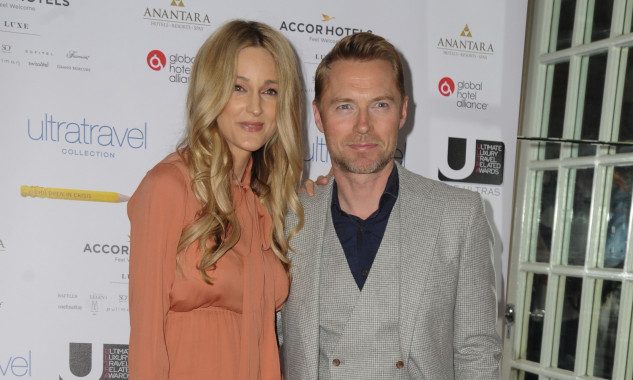 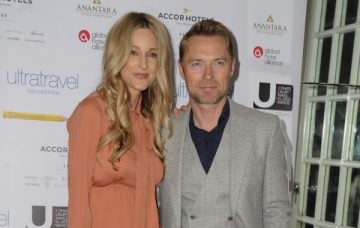 Ronan Keating and wife Storm have been enjoying an idyllic summer holiday with their baby son. The couple have been island hopping on a cruise with little Cooper, one, and sharing plenty of beautiful pictures with their grateful fans. In one beautiful snap, the little one has swiped his mum’s sunglasses, prompting Storm to joke […]

Ronan Keating and wife Storm have been enjoying an idyllic summer holiday with their baby son.

The couple have been island hopping on a cruise with little Cooper, one, and sharing plenty of beautiful pictures with their grateful fans.

In one beautiful snap, the little one has swiped his mum’s sunglasses, prompting Storm to joke in the caption: “He wears them better than me!”

Storm, a television producer, shared a string of other snaps showing Ronan doting on their baby son as he helped him play golf on board their boat.

Little Cooper, clad in pink shorts, was seen looking rather fascinated as his dad took a swing while standing on a small golfing platform.

Ronan is known to be a keen golfer and has previously shared photos of him showing Cooper the ropes on a course.

Other sweet photos showed Ronan cuddling Cooper to protect him from spray thrown up as their boat sped away to a new destination.

Ronan was also seen holding Cooper in the shallows of the ocean as they enjoyed a dip.

He also took his youngest child for a dip in their cruise ship’s swimming pool, which was caught on camera by Storm as she stood in the decks above them.

Ronan paid a touching tribute to wife Storm over the weekend as they jetted off from the UK and on their holiday.

He shared a photo of her on a private jet alongside the caption: “This Girl!!!! My life, My heart. #luckyman.”

The family have two weeks for a holiday in between Ronan’s concert commitments; they jetted off after Boyzone’s recent gig at Kew Gardens and the band are due to perform in York on the 28th of July.

Ronan marked Cooper’s first birthday in April with a sweet tribute saying: “My youngest is one today. What a legend this little man is. Never have I known a child to smile so much and mean it like this fella. A heart of gold and the personality I could only dream of.”

He added of his wife of nearly three years: “I owe all of this to my Stormy. It’s her heart and soul that makes Coops the boy he is.

“I’m one lucky man to have 4 incredible children. Happy Birthday little Monkey. You are everything. So much love from all of us. #Partytime #Coopisone#happybirthdaycooper.”

Ronan is also dad to Jack, Missy and Ali from his first marriage.

What are your plans for the summer?  Leave us a comment on our Facebook page @EntertainmentDailyFix and let us know what you think!