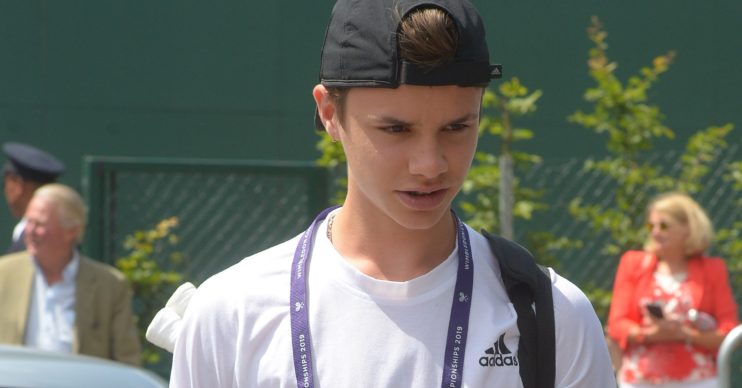 Loved-up Romeo shared his love for his girlfriend on Instagram

Loved-up Romeo Beckham shared a selection of cute pictures with girlfriend Mia Regan to mark their one-year anniversary together.

The sentimental 17-year-old played up to his namesake by posting a series of snaps from their first year together.

He publicly declared his love for his pretty girlfriend.

Alongside the snaps, he wrote: “Happy one year Mooch, love you so much,” with two heart emojis.

Happy 1 year mooch love u so much ♥️♥️ @mimimoocher

In each of the three pictures he shared, the loved-up teens can be seen gazing lovingly at each other and sharing a sweet smooch.

What did Romeo’s family say?

His aunt Joanne, David Beckham’s sister also got all soppy.

She wrote: “Oh my god this is the cutest ever. Happy one year guys.”

Romeo and Mia’s relationship was first confirmed last September when the model was seen with the Beckham clan at a private dinner.

The family outing showed that Mia had the seal of approval from Victoria and David.

Mia is obviously well-settled in to the Beckham family, with Romeo recently posting a picture posing with his girlfriend and his nan Jackie Adams, Victoria’s mum, enjoying a meal together.

Romantic Romeo whisked Mia off to city of love Paris for the weekend in December.

During the trip, they visited the main tourist attractions as well as catching up with friends.

Mia was also there when David launched his new football team, Inter Miami.

However, the young couple appear to be separated by the coronavirus lockdown at the moment with Romeo self-isolating with his parents Victoria and David, and siblings Cruz and Harper in their Cotswolds country pile.

Meanwhile, older brother Brooklyn is still the US with his girlfriend Nicola Peltz.