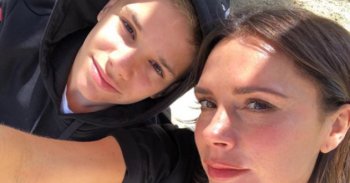 Posh has apparently given it "the seal of approval"

The 16-year-old was introduced to Stranger Things star Millie, 15, in December 2016 when she handed an award to Romeo’s famous dad David Beckham at charity Unicef’s 70th anniversary gala.

And now, it’s been said the teenagers are in the “early days” of a romance and his mum Victoria Beckham approves as she’s a “big fan” of Millie’s.

Read more: David Beckham’s sons feared they had let their dad down when they quit football

A source has told The Sun: “It’s early days but they make a very sweet couple. Posh has given it the seal of approval as she is a big fan of Millie’s.”

An insider close to the Beckhams added: “Romeo and Millie are hanging out.”

Ent Daily has contacted reps for the Beckhams and Millie for comment.

At Unicef’s 70th anniversary gala in 2016, Millie and David shared a hug on stage and she later posted a photo of them posing together on social media.

She said at the time she would “remember this evening for the rest of her life”.

Millie also admitted she was a fan of Romeo’s on the red carpet.

When asked what she hoped would happen with her Stranger Things character Eleven on the show, Millie joked: “I don’t know. Something with Romeo Beckham.”

The young actress took to Instagram at the time to tell fans they had broken up, but they planned on “remaining friends”.

She said: “The decision with Jacob and I was completely mutual. We are both happy and remaining friends.”

Meanwhile, Romeo has never dated anyone publicly before.

Fashion designer Victoria recently revealed Romeo and his brothers Brooklyn, 20, and Cruz, 14, were worried their dad would be disappointed when they decided not to follow him into football.

“I remember Romeo sitting in the bath getting really upset saying, ‘I don’t want to let Daddy down’. So I told him daddy just wants you to be happy.

Last year, it was reported that the couple built Romeo a £30,000 artificial grass tennis court at their home as Victoria was reportedly determined to make her son “the David Beckham of the tennis world”.