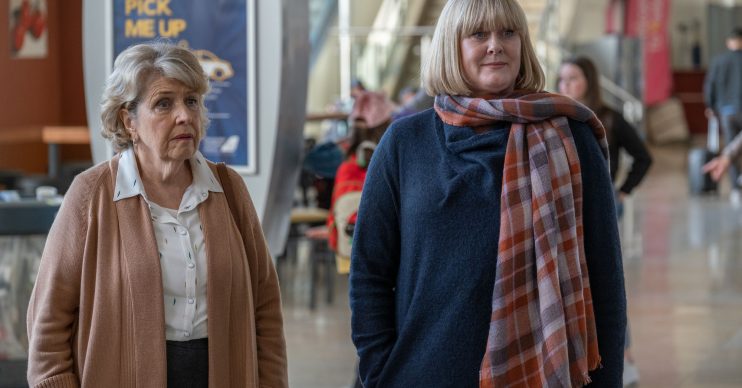 A dinner date does not go well

What seemed like it could have been a blossoming romance soon went pear-shaped in the second episode of series five of Last Tango in Halifax.

Caroline (Sarah Lancashire) had invited Ruth, who heads her English department, over for dinner. Viewers saw her confide in Gillian (Nicola Walker) that she was interested in Ruth (Lu Corfield) romantically, and Gillian encouraged her to go for it.

The night seemed to be going well as the pair laughed loudly over several glasses of wine, and Ruth had agreed to stay the night at Caroline’s place.

But then Caroline revealed she had once been married to a woman, and Ruth immediately clammed up. “I didn’t know you were gay,” she said.

The disastrous night ended with Caroline being woken up by a stern-faced Ruth rushing out to her car to leave, first thing in the morning.

It was an unwelcome end to a promising evening – and Caroline will now have to face Ruth again in the school she runs.

It also came after Caroline’s ex-husband John (Tony Gardner) called her to reveal he still has feelings for Caroline, and has no desire to marry his partner Judith, despite having agreed to her proposal.

John insisted that Caroline could not really be a lesbian, since they had several good years of marriage together.

Elsewhere, Alan and Celia (Derek Jacobi and Anne Reid) were surprised by Alan’s brother Ted’s behaviour. Ted, played by Timothy West, arrived at the airport on a flight from New Zealand, only to announce that he plans to stay in Yorkshire.

Then on the morning after his arrival, they awoke to discover Ted gone from his bed, and all the windows flung open.

“I have no idea why some people like Ruth are so homophobic. Caroline can’t help the way she is? She didn’t choose it??” said one.

Another showed their sympathy with the broken heart emoji, and the words: “Oh Caroline, we’ve all been there love!”

Yet another tweeted: “Why is that woman (Ruth) being so horrible about Caroline being a lesbian?”

But another viewer thought Ruth’s reaction was quite natural for someone who wasn’t interested in Caroline romantically.

“I don’t understand this anti-Ruth stuff. If you’re not gay and you thought it was just a girls night then it’s a natural reaction,” the viewer tweeted.

I have no idea why some people like Ruth are so homophobic,, Caroline can’t help the way she is? She didn’t choose it?? #LastTangoInHalifax

Oh Caroline we’ve all been there love! 💔 #LastTangoInHalifax

Why is that woman (Ruth) being so horrible about Caroline being a lesbian? #LastTangoInHalifax

You can say I’m sorry I didn’t realise you were gay I’m not btw and be nice about it .. that reaction was just awkward #LastTangoInHalifax

What did you think of this episode? Was Ruth mean or was her reaction to be expected? Go to our Facebook page @EntertainmentDailyfix and leave your comments