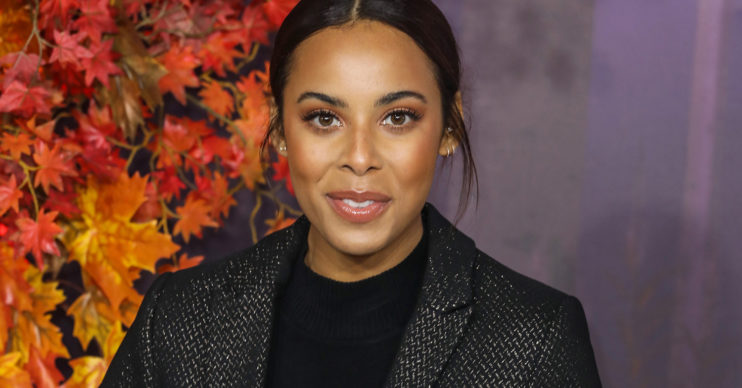 Rochelle is due in October

TV’s Rochelle Humes has revealed her boobs are now bigger than her belly in a pregnancy update.

The star, who is expecting her third child with husband Marvin Humes, gave her fans the update on Monday.

Rochelle, 31, showed off her growing bump in a cream knitted co-ord set.

What did Rochelle say?

Rochelle said: “25 weeks (not that I’m counting). At this point my boobs are actually bigger than my belly did this happen to any one else?

“The only thing I need to tackle now is my sleep, or lack of.

“We now have 3 months ish left and I feel like I can see the end, I’m just SO excited to meet my little man.”

She added: “It’s been such a funny time to be pregnant, I’ve only really started to see my friends and family now (from a distance) so it really has flown by this time around.

“Not long now. PS I’m not sure if I’m gonna be able to squeeze myself into this set for these pics for much longer…”

The only thing I need to tackle now is my sleep, or lack of.

Fans gushed over Rochelle’s bump with one person writing: “You’re so gorgeous and that bump is blossoming.”

Another said: “I’m 25 weeks with my second, you’re absolutely glowing.”

A third added: “Bet you are relieved the sickness has stopped! Bump looks amazing Rochelle.”

Earlier this year, Rochelle announced she and Marvin were expecting their third baby.

The couple are already parents to their daughters, Alaia-Mai, seven, and Valentina, three.

But they are now expecting a baby boy.

Last week, Rochelle revealed she was struggling with sleepless nights.

She said on Instagram: “It gets to about half two every morning, well night that is isn’t it, and my body is just wide awake.

“I can’t get back to sleep until about half five to which then it’s nearly six so I may as well be up.