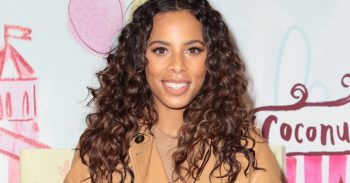 They met once when Rochelle was five-years-old

Rochelle Humes has revealed she has reunited with her long-lost sister Lili Piper after 23 years apart.

The presenter met her sibling once when she was just five-years-old but they’ve been apart ever since.

Speaking to Giovanna Fletcher on her Happy Mum Happy Baby podcast, Rochelle explained: “I’ve never told anyone this before. Two years ago, I was at our management’s Christmas party and Love Island’s Kem was there.

“He was chatting away and said, ‘I got to talk to you… as soon as I became a celeb, I promised my friend Lili that I would talk to you as she’s your sister on your dad’s side.’

“I knew of her and met up with her when I was five, but it was so complicated as they were a lot younger and my dad wasn’t involved.”

The singer said that Kem asked if he could give Rochelle’s number to Lili and that’s when the pair started talking.

Rochelle continued: “She WhatsApped me and I didn’t reply till the morning. We planned to go out for dinner with my other sister and brother and I made [my husband] Marvin come with me because I was so scared.

“We are literally the same people, Marvin was like, ‘OMG, there’s more of you.’ We’ve spoken every day since – Jeremy Kyle style. It’s like we’ve known each other all our lives.”

In March, Rochelle shared a photo of herself, Lili and her other sister Sophie to celebrate her 30th birthday.

The photo showed the trio posing alongside each other outside.

Fans couldn’t get over the close resemblance between Rochelle and her sisters, with some people even asking if they were triplets.

One person commented: “Sisters or triplets?” while another asked: “Are you a triplet???”

“Can’t even tell which one is you,” remarked a third.

Meanwhile, it’s been reported that Love Island bosses are desperate to get Rochelle’s sister Sophie on the show this year.

A source told The Sun: “ITV2 bosses are really keen for Soph to be the star of this year’s series.

“Last year they had Dani [Dyer] and her claim to fame with dad Danny captured viewers and boasted the show’s ratings. This year they’re hoping to do the same with Rochelle and her youngest sister, who’s the spitting image of her.”

Have you ever reunited with a long-list sibling or family member? Leave us a comment on our Facebook page @EntertainmentDailyFix and let us know!