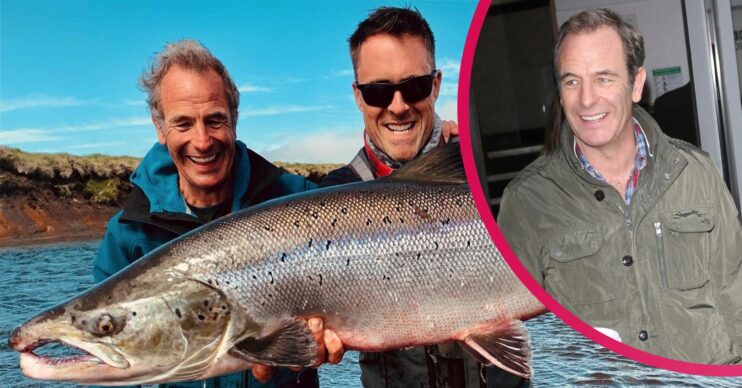 The show airs tonight on ITV.

Robson Green is starring in Robson and Jim’s Icelandic Fly-Fishing Adventure as they go on a fishing journey.

Robson stars alongside fellow actor Jim Murray in the series – but who is he?

During the first episode, which is on again tonight, Robson and Jim arrive in Iceland to begin their fishing adventure, with Robson opening up about how the sport had helped him through a difficult time in his life.

Who is Robson Green?

Robson Green is an English actor, singer-songwriter and presenter.

He was born in Hexham, Northumberland in December 1964 and is currently 56-years-old.

The actor tried out a number of careers before deciding on performing, including the RAF, draughtsman and professional boxing.

He first made his name as an actor on Casualty, playing Jimmy Powell from 1989-1992. He later played Fusilier Dave Tucker on ITV’s Solider, Soldier between 1991-1995.

He’s since appeared in over 40 TV shows and films throughout his career.

He’s most well known for the ITV detective drama Grantchester and for his series of nature and adventure documentaries, such as Robson’s Extreme Fishing Challenge.

The actor has been fishing since he was a child and credits it as a key tool in managing his mental health. He’s fished in more than 130 countries all over the world.

During the show, the actor reveals the difficulties he’s had in his life with alcohol and drugs.

“I needed something in life that made sense and, for me, fishing makes sense,” he said.

“Early on in my acting career I was reckless. It was all about Robson. But I’ve learnt so much from fishing and have an inner peace now that had been missing.”

Is Robson married? Does he have children?

The actor met his second wife former Page 3 model Vanya Seager in 1995 and in 2000 they had a son called Taylor Seager-Green. The couple married in 2001 but in 2013 announced that their marriage had “irretrievably broken down”.

The first episode of Robson and Jim’s Icelandic Fly Fishing Adventure is on ITV, tonight, at 10.45pm.