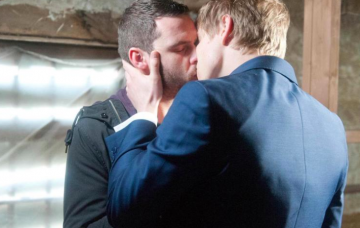 Emmerdale’s Robron – a timeline of their love

And all - well, nearly all - is well in soapworld again

What a time to be alive – the days are getting longer, summer is getting closer and Robert Sugden and Aaron Dingle are reuniting.

To celebrate this happiest of occasions in style, we thought we’d give everyone an in-a-nutshell-reminder of how Robron came to be.

(This is a highly compressed version of events or we’d be writing into the night!)

Tissues at the ready, lads.

‘Just found it parked here mate, nothing to do with us’ – the line that set the Robron ship sailing

Scheming Robert enlists Aaron and Ross to raid Home Farm and Chrissie White’s mother’s wedding ring is stolen. Robert feels guilty and Aaron helps get the ring back from Ross

Sneaky Robert stages a breakdown to get Aaron alone. They end up kissing passionately

After a tip-off from Aaron who wants the affair out in the open, Katie Sugden catches them kissing at Wylie’s Farm and snaps it on her phone

She and Robert fight over the pic and he pushes her over, causing the floor to cave in and killing her

He spends a month in a coma and Aaron is arrested

Robert eventually comes round and doesn’t believe Aaron shot him

Ross is unmasked as the shooter, pulling the trigger on behalf of Andy Sugden who blames Robert for Katie’s death

2016 – Aaron confesses to Robert about Gordon abusing him

Robert wants to know why he is hurting himself

He confesses his feelings for Aaron to the court

Gordon gets sentenced to 18 years in prison

2016 – Robert burns a letter from Gordon

He calls Robert controlling and tells him to stay away

After a few false starts and some help from Liv, they eventually move in together

2016 – Robert asks Paddy for his blessing

He wants to commit to Aaron, Paddy isn’t keen but says yes

Having accepted his bi-sexuality and wanting to be with Aaron, Robert prepares to pop the question

2016 – Robert proposes to Aaron in hospital

The police raid the wedding looking for Faith Dingle

Robert and Aaron say their vows in the garage, in private

Robert can’t handle the situation and gets drunk

He has sex with Rebecca

Robron move into the Mill and Robert confesses everything to Aaron

2017 – Aaron hands back his wedding ring

2017 – Robert decides to get revenge on the Whites

Read more: Is a Robron wedding happening sooner than we think?

It’s only a matter of time before they reunite now!

What’s next for Robrob? Leave us a comment on our Facebook page @EntertainmentDailyFix and let us know what you think!

Emmerdale is on tonight at 7pm on ITV