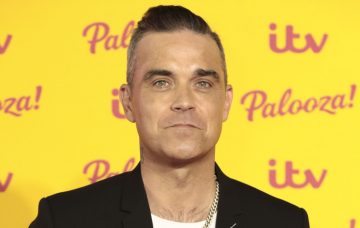 The judge is juggling the show with his tour

Robbie Williams is leaving the X Factor to go on tour and he is reportedly set to be replaced by legendary musician Nile Rodgers.

As of this Sunday, the 44-year-old will be absent from the panel as he jets off on his tour, with his performance in Chile the following Monday.

In a first for the show, this Saturday’s episode will reportedly be pre-recorded to allow Robbie to appear on the judging panel. It will still air at the usual time on Saturday.

Then, according to The Sun, Chic guitarist Nile, 66, is expected to step in temporarily on Sunday night’s show, which will broadcast live as usual.

Robbie will be touring South America for the next few weeks and he is apparently going to miss two more weeks of filming, while he performs in Mexico and Buenos Aires.

He had already committed to his gigs before signing up to the X Factor with his wife Ayda Field.

A source told The Sun: “Nile met Robbie’s contestants on Tuesday and will be present at the studio on Saturday during filming before keeping his seat warm on Sunday’s show.

“Robbie has been very on hand so far this series, but he is unlikely to be able to return over the next few weeks for rehearsals. Nile is already on hand to oversee the groups and give them the benefit of his expertise in the meantime.”

Iconic musician Nile has already enjoyed a guest stint on the show to help Louis Tomlinson, 26, at Judges’ Houses.

@louist91 @liampayne @thexfactor Yo, I’ve been asked to do tons of shows like this & mostly said no, but chopping it up w you guys made me see things differently. And Liam was singing some dope stuff to me off camera. Warmly, Big Bruh Nile

On Instagram, Nile previously posted about appearing alongside Louis and fellow guest judge Liam Payne on the X Factor: “Yo, I’ve been asked to do tons of shows like this & mostly said no, but chopping it up w you guys made me see things differently. And Liam was singing some dope stuff to me off camera. Warmly, Big Bruh Nile (sic).”

X Factor boss Simon Cowell has said he is trying to work out a way of getting Robbie to be on the show as much as possible while he works away.

Talking at The Pride of Britain Awards earlier this week, Simon, 59, told The Mirror: “We’re going to try to fly him in. I can”t do the show without him. We knew in advance, but we’ll deal with it.”

Simon broke X Factor tradition when he decided to hire both Robbie and his partner Ayda, 39, as judges.

Robbie first revealed in September he’d be missing a handful of X Factor live shows due to his prior touring commitments.

He told ITV’s Lorraine: “I’m genuinely gutted I’ve got to go. It was all booked in before, I’m going to go off and do a few gigs in South America. I’m looking forward to going down there because I haven’t been there forever but if I’d known, it wouldn’t be happening, put it that way. I’m going to miss the show.”

Entertainment Daily! has contacted The X Factor for comment.

Will you miss Robbie on the show? Leave us a comment on our Facebook page @EntertainmentDailyFix and let us know what you think!