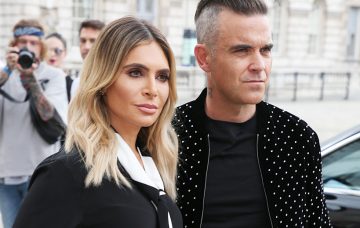 Who knew Robbie Williams could be so adorable?

The singer has spoken about his newborn daughter, Coco, saying: “She’s the most chilled baby that we’ve ever had.”

The former Take That singer and his wife Ayda Field surprised fans by announcing they had welcomed a third child via a surrogate last month.

Robbie – who is already dad to Teddy, six, and Charlie, three – told The Mirror: “Coco Josephine Williams, she’s the most chilled baby that we’ve ever had out of all three of them.

“And it’s interesting, the progression [as] a parent – from the first child where, when they go to sleep, if you hear something two miles away you wanna send somebody two miles away to tell them to shut up.

“Then on the third one, you know, the kids are fighting, the TV’s on and baby stays asleep, and I think, because we’re more chilled, she’s more chilled.”

The 44-year-old added: “She doesn’t know what the smile is, but that’s all she’s up to right now – is being adorable and not giving us any hassle whatsoever.”

The new X Factor judges confirmed in September that Coco is “biologically” their baby.

Ayda 39, said: “It has been a very long and difficult path to get here, which is why we have kept it on the down low. Family comes in all forms, and this little lady, who is biologically ours, was carried by an incredible surrogate mother, to whom we will be eternally grateful.

“We are over the moon to have this beautiful baby girl in our lives and so blessed that we live in a world which makes this possible.”

The couple introduced Coco to pals during a gathering in California two weeks ago.

Ayda’s friend American TV, host Terri Seymour, took to Instagram to share a couple of snaps from the bash at French restaurant Ladurée in Beverly Hills.

The first photo sees Ayda cuddling up to her pal at the event.

We love you @aydafieldwilliams! 💕 Welcome to the world sweet baby Coco 💗💞💖

Terri, who obscured Coco’s face with an emoij, captioned the post: “We love you @aydafieldwilliams! Welcome to the world sweet baby Coco.”

These two make such cute parents. And we’re glad to hear baby Coco isn’t giving them too much trouble…

Are you enjoying these two on X Factor? Leave us a comment on our Facebook page @EntertainmentDailyFix and let us know what you think.