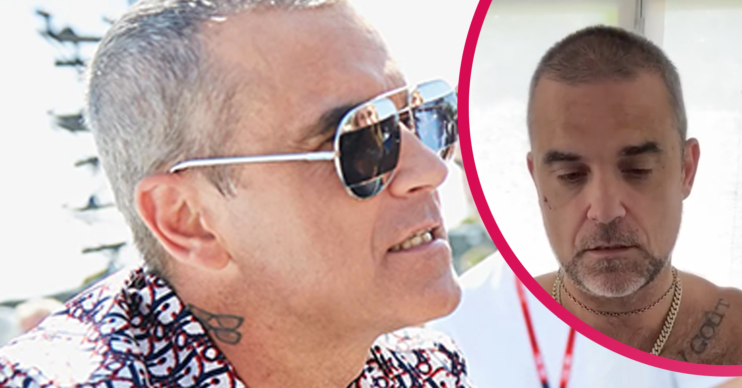 The singer enlists the help of a special fill-in powder

Singer Robbie Williams has left fans stunned after getting rid of his thinning grey hairs with a special fill-in powder.

The 46-year-old musician revealed he is suffering from thinning hair, but had figured out a handy way to prevent it.

Documenting the process on Instagram today, his wife Ayda Field told followers: “From thinning to winning.”

Meanwhile, Robbie said in a video: “I’m going thin on top, so I’ve bought some hair.”

Ayda went on to interrupt the star by explaining her husband had suffered a nasty cut on his cheek while shaving.

She said: “By the way, nice shaving cut on your cheek.”

Robbie continued: “I don’t even know if it’s going to be the right colour.”

The Angels hitmaker then began to gentle dab the powder on his scalp, giving him the appearance of thick, full hair.

Fans were left stunned by the process, with one commenting: “Stooop it! You look great, you don’t need any (kinda) powder 👌🏻.”

Another added: “It’s a look that is definitely being pulled off well! Also, rocking the beard nicely RW!”

A fourth joked: “Just don’t stand in the rain or near a sprinkler…so funny Ayda x.”

It hasn’t been all fun and games for Robbie and Ayda.

Earlier this month, the pair revealed they were threatened with a beheading during a charity trip in Haiti.

It was organised by Unicef and took place in 2010 shortly after an earthquake ravaged the country.

Speaking on Ayda’s Postcards From The Edge podcast, Robbie explained: “I got threatened to be beheaded in Haiti. We were going out there to help.

“When we were threatened to be beheaded, I was like, ‘Should we go to the next street then?’ and looking back, it was scary.”

Ayda joined in. She added: “I was with you, I was being threatened to be beheaded as well!”

While there, Robbie spent two days in the port town of Jacmel, witnessing the chaos in the aftermath of the disaster first-hand.

The pair have since went on to have four children together – Theodora, seven, Charlton, five, 18-month-old Colette and four-month-old Beau.

Read more: Piers Morgan pays tribute to Dame Vera Lynn on the day of her funeral

The family have remained in Los Angeles during lockdown, with Robbie admitting he doesn’t really feel safe there following a string of other famous people being targeted by stalkers and burglars.

Speaking to The Sun, he said: “I feel there have been a lot of attacks on celebrities.”

He added: “People can say: ‘Well you are all right in your mansions.’ Yes, we are, but this is what is happening.”