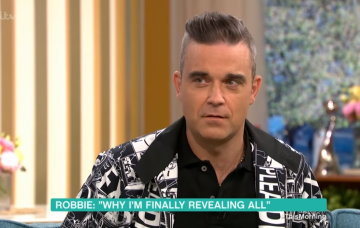 Will he be a judge on the show on the next series?

Robbie Williams has kept very tight-lipped on whether he will be a judge on The X Factor when the show returns later this year.

But the star jokingly warned he’d be “scared for his safety and health” if he did get the role!

It’s been reported Robbie and his wife Ayda Field will replace long-serving judge Louis Walsh and singer Nicole Scherzinger on the judging panel.

During an appearance on Tuesday’s This Morning, Robbie, 44, addressed the rumours.

“But people say that every year, and we always say no comment.”

While talking about the controversy he caused at the World Cup opening last week – where he put his middle finger up to the camera – Robbie admitted he doesn’t know what he’s going to do at any time, and that could be an issue on live television.

He continued: “If there is an X Factor in my future, whether it be this year or next year or never, I’m scared for my own safety and health.

“Not because of the public… [but] my wife. She is an A+ student from Beverly Hills, incredibly square, she is like ‘why would you do that?’”

Addressing the reports that he and Ayda are becoming judges, Robbie added: “She is supposed to be doing it with me. I have read those reports too.

“There is a lot of me that would love to do it. But as it happens, people are talking, nothing has been signed. But watch this space.”

The star revealed he and the show’s boss Simon Cowell have hung out and spoke about “a lot of things.”

Earlier this month, it was reported that both Robbie and Ayda could be on the judging panel alongside Simon and another judge.

It came shortly after Louis announced he had quit the show after appearing on all but one of the talent show’s series since it began in 2004.

He said it was time to move on and will become head judge on Ireland’s Got Talent next year, as well as pursuing other projects.

He said in a statement: “I’ve had a fantastic 13 years on The X Factor but the show needs a change and I’m ready to leave.”

Meanwhile, Sharon Osbourne will have a scaled-back role in the show when it returns later this year.

Would you like to see Robbie and Ayda as judges on the show? Leave us a comment on our Facebook page @EntertainmentDailyFix and let us know what you think!