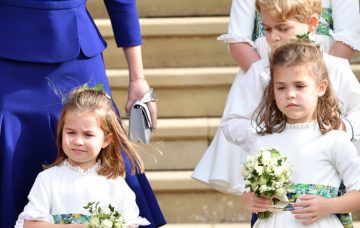 Little Teddy asked the Duchess of York if she was the Queen!

Robbie Williams has shared the story of why daughter Teddy asked Sarah, Duchess of York if she was the Queen.

The popstar, 44, told OK! Magazine he couldn’t be more proud after watching Teddy, six, serve as bridesmaid for Princess Eugenie at the Royal Wedding on Friday, October 12.

One particular standout moment for many of us was when cameras caught little Teddy quizzing Eugenie’s mum Sarah on whether she was the Queen!

Robbie explained the moment came about after Teddy – full name Theodora – declined Robbie and Ayda’s suggestion she look at a photo of the Queen before the big day.

He said: “We did say, ‘Baby, you should really see a picture of the Queen before you meet her.’ And she said, ‘No, I’m alright.’

“So she didn’t in the end, which is why she asked the duchess if she was the Queen. But she gave a flower to the Queen. We were so proud. We were sat there and as Princess Eugenie and Jack were walking up, she caught our eye.”

Robbie added: “It was a great day.”

Teddy, who served as a bridesmaid alongside Princess Charlotte and Mia Tindall, had been caught on video outside St George’s Chapel at Windsor Castle posing the funny question to Fergie.

As the little bridesmaids and page boys left the chapel, Teddy was heard asking Fergie: “Are you the Queen?”

Sarah, who was getting into her car, politely replied: “No, I’m not the Queen.”

Undeterred, Teddy then asked: “Are you a princess?”

Last week, Ayda also shared her pride in Teddy’s starring role at the Royal Wedding, admitting on ITV’s Good Morning Britain she was surprised how confidently her daughter handled everything.

“I thought she would be nervous – not at all, not at all. She took it very seriously,” she said.

“Teddy’s a very well-behaved child,” added Ayda, “but you never know if they’re going to kick off or [say], ‘Don’t hold my hand’, or ‘These are my flowers’. They are unpredictable those little ones. So I was like, please, please, please….”

Ayda then joked: “She’s a mini Williams, so at any point she could have ripped off her clothes and been in her tiger pants, done something inappropriate!

“She was just like a dream. I was so proud. When she walked up the aisle, she didn’t know where I’d be standing, she saw me and she did a little cheeky smile and I got so emotional. It’s such a big stage and a big moment for everybody. She owned it, I was just so proud of her.”

Has your child ever asked a funny question? eave us a comment on our Facebook page @EntertainmentDailyFix and let us know what you think!