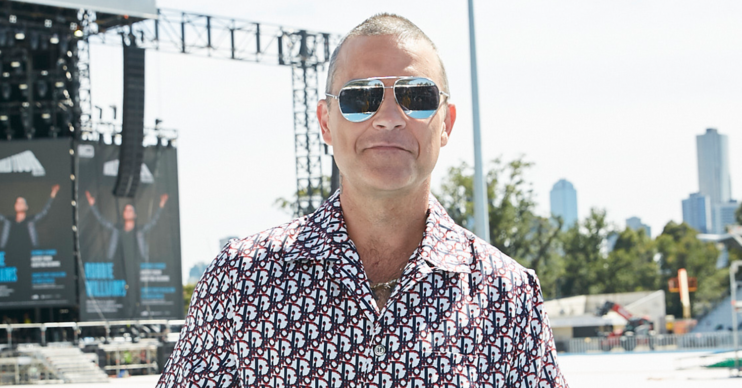 Fans swoon over the singer in his Versace trunks!

The 46-year-old former Take That star flaunted his body in a pair of tiny briefs while soaking up the sun at his Los Angeles mansion.

Fans were treated to the saucy snap by his wife Ayda, 41, who caught the star off-guard as he sunbathed in the pool.

In the photo, Robbie is seen reclining on colourful tiles wearing a pair of tiny Versace shorts, sunglasses and a chain.

What did fans have to say?

And, while some fans couldn’t help but comment on the Williams’ incredible mosaic pool display, others were quick to gush over the hitmaker’s body.

The famous pair are currently isolating at their mansion in Beverly Hills during lockdown.

What a view! Just brightened my day for sure.

However, visitors may want to stay away from the pool after Robbie recently revealed he often urinates in it.

The singer told the Daily Star: “I peed in the pool yesterday. I go to other people’s houses to pee in their pools.”

Robbie compared himself to a dog by insisting that he does it on purpose in order to mark his territory.

The superstar continued: “Then it is my pool. I own it. Like dogs’ pee. That’s all I do in pools.”

Ayda added: “I have peed in the shower too but it’s more of a dribble down as a female, whereas guys can aim. For sure in a pool as well.”

Despite their disgusting home habits, Robbie has admitted he doesn’t really feel safe there, following a string of other famous people being targeted by stalkers and burglars.

Speaking to The Sun, he said: “I feel there have been a lot of attacks on celebrities.”

He added: “People can say: ‘Well you are all right in your mansions.’ Yes, we are, but this is what is happening.”