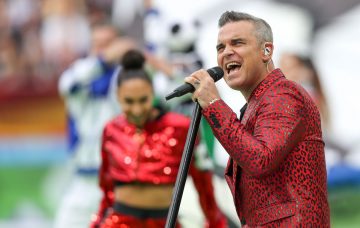 Global viewers thought the Take That star had morphed into another singer...

Robbie Williams took to the pitch in Russia on Thursday to perform at the World Cup opening ceremony and many viewers did a double-take.

They couldn’t get over how much the former Take That star now looks like The Smith’s frontman-turned-solo-artist, Morrissey.

As Robbie, 44, belted out his hits Angels, Feel and Let Me Entertain You, viewers took to Twitter to joke about how he’s morphing into the 59-year-old.

His haircut looked just like the Spent The Day In Bed singer’s, while he wore a red suit and black shirt that also emulated Morrissey’s style.

“Amazing opening ceremony. But… is it just me or #RobbieWilliams is slowly turning into #Morrissey?” one viewer asked.

“Has anyone else noticed how #RobbieWilliams seems to be morphing into #Morrissey?” said another.

“Just turned on the #WorldCup opening ceremony and I swore that was Morrissey until I turned the sound up #RobbieWilliams #lookalike,” said a third.

“Not a big fan of Morrissey singing #RobbieWilliams songs,” joked a fourth. 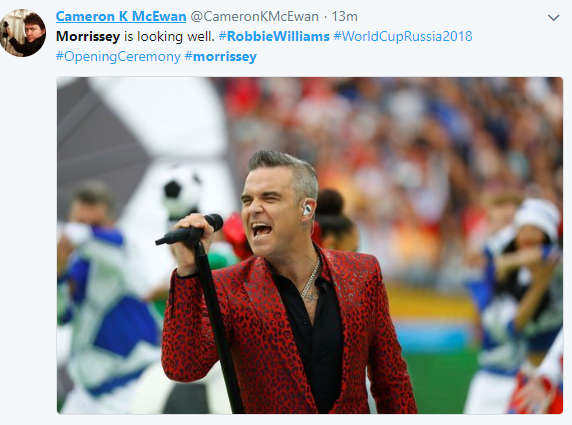 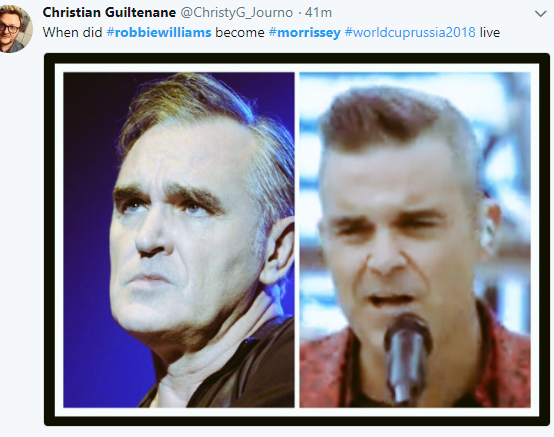 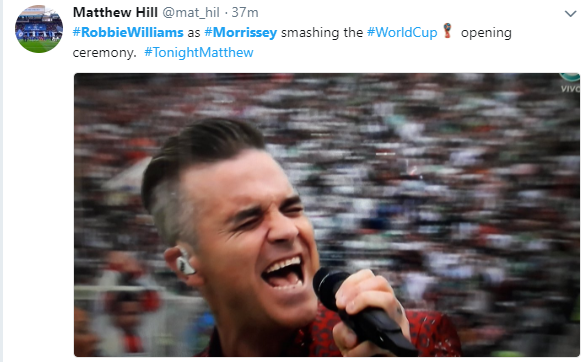 It wasn’t just the Brits commenting on the resemblance. There were also tweets from people around the world joking about the similarity, as #robbiewilliams quickly started trending.

Others were confused over why Robbie was there at all before the hosts took on Saudi Arabia to kick off the tournament, as they had presumed a Russian popstar would be invited to perform.

“Why is #RobbieWilliams opening the #Worldcup? See when there’s a pop concert ya don’t invite footballers up for a 5-a-side before it starts,” one wrote.

“Why on Earth would Robbie Williams be singing in the opening ceremony for a world cup hosted in Russia???!! Where’s the logic in that? #WorldCup #Russia2018WorldCup #RobbieWilliams,” a third asked.

The singer then caused some controversy when he lifted his middle finger to the camera in a rude gesture as he sung the line, “I did this for free.”

Some viewers were outraged that he did so in front of a global audience of millions, including children.

“Thanks @robbiewilliams! Got my year 1 class sticking their middle fingers up at each other now! Fun one to explain to the parents  #Worldcup2018Russia #robbiewilliams #idiot,” wrote one teacher.

“RobbieWilliams You were a very well paid guest, shame on your middle finger. #FifaWorldCup2018,” tweeted another.

“RobbieWilliams Great singer but someone as unpredictable as him should never be given such a privileged position after that mindless middle finger salute. He deserves no accolade. What a fool you are Robbie,” wrote a third.

Football fan Robbie announced he was to perform at the World Cup on Monday.

“Very excited to be returning to Russia to perform at the opening of the @fifaworldcup! Tune in early on Thursday for an unforgettable show!” the father-of-two wrote as he shared the news on Instagram.

Over the weekend, he successfully staged another Soccer Aid to raise money for Unicef, a fundraiser he came up with a few years ago involving an English team taking on the ‘rest of the world’ with sides made up of former professionals and celebrities.

His England team won after a penalty shoot-out.

Meanwhile, it’s also been rumoured this week that Robbie and his wife Ayda Field could become X Factor judges.

Simon Cowell is said to have been desperate to sign up the outspoken singer for years. He’s previously appeared at Judges’ Houses to help whittle down the acts for the live shows.

What did you think of Robbie’s World Cup performance? Leave us a comment on our Facebook page @EntertainmentDailyFix and let us know what you think!