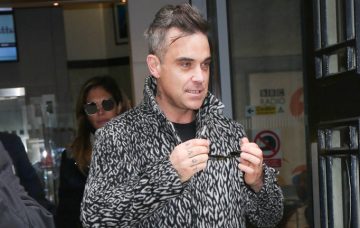 Robbie Williams has described being among hundreds of guests and staff evacuated from a fire at a 115-year-old luxury hotel in central London.

The London Fire Brigade (LFB) said 20 engines and 120 firefighters and officers went to the scene at the Mandarin Oriental Hyde Park, in Knightsbridge, on Wednesday, as huge plumes of thick black smoke rose into the sky.

It added that the fire was brought under control by 9.51pm.

The 12-storey hotel, nearby Harrods, completed the “most extensive restoration in its 115-year history”, according to a statement published by owner Mandarin Oriental Hotel Group in May.

All 181 bedrooms and suites are “now more luxurious and comfortable than ever before” and the building’s “iconic facade was revitalised”, the company said.

Former Take That singer Robbie and his wife, the actress and Loose Women panellist Ayda Field, described on Instagram seeing smoke on the floor above them.

Robbie, 44, said: “I went on the balcony and looked up and there was just billows and billows of smoke.

“I came back in from the balcony and said, ‘The hotel’s on fire,’ and then the next thing a knock at the door came and there was a bellboy there and they said, ‘Get out’.”

Robbie and Ayda, 39, ran down an external fire escape to safety.

The LFB, which was alerted shortly before 4pm, said 36 guests and 250 hotel staff were evacuated but the London Ambulance Service reported no injuries.

Firefighters suspect the blaze spread across a facade for plants and vegetation and into “several floors” of the hotel, but it was “quickly extinguished”.

The cause remains under investigation and firefighters will remain on scene throughout the night.

A tradesman working at the hotel said he saw a “big fire” on the roof before raising the alarm.

The 19-year-old lift engineer, who gave his name as Harry, said: “I said (to my colleague) ‘There’s a fire over there, let’s get out of the building. Get out the lift shaft, I’m being serious’.

“We ran down the stairs and went and got the scaffolder out of the loading bay.”

The Princess Royal had been due to attend an engagement at the hotel on Wednesday evening, which Buckingham Palace said had been cancelled.