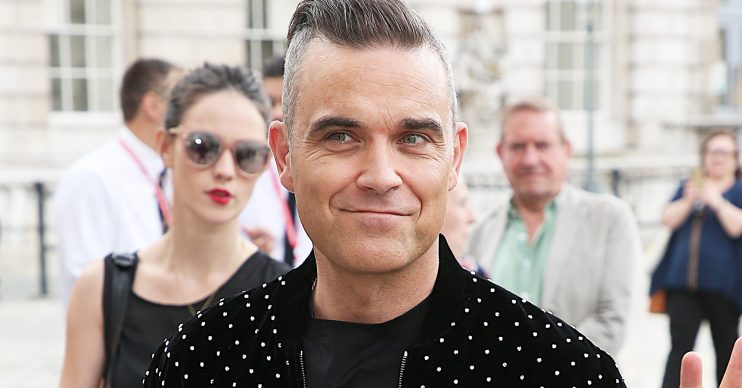 Singer beat-boxes for his wife Ayda and their youngest tot

Ayda Field has shared a super-cute video of her youngest daughter Coco listening intently as her superstar dad beat-boxes one of his most famous tracks.

The couple and Coco, eight months, are shown in bed, with Ayda sipping a smoothie and Robbie clearly in the mood to entertain the tot.

As he starts beat-boxing the tune to Lovelight, little Coco – who was born via a surrogate – starts dancing along, much to her mum’s delight.

“Look at her face,” Ayda squealed, as Coco bopped up and down, dancing to her dad’s song.

Uploading the video to her grid, Ayda described the tot as a “captive audience”.

She said: “@robbiewilliams entertaining at least one person with his Lovelight #cocopow #captiveaudience #rudeboxlivesinthishouse #babylove #familyfun.”

Ayda’s followers were quick to comment on the video. One said: “Ok, THE most adorable thing I have seen all day (that’s Coco by the way, soz Rob!)”

Others praised the singer’s parenting skills. One said: “Omg I thought my favourite Robbie was 90’s Robbie but its surely Robbie as a dad [heart eye emoji] [sic].”

The couple are also parents to daughter Teddy, six, and son Charlton, four.

Speaking to The Sun shortly after Coco’s birth, the Let Me Entertain You singer revealed that the tot was “the most chilled baby I’ve ever known”.

He added: “The kids are getting on really well with her, there’s no jealousy.”

“In fact, there’s just lots of cuddles and Teddy wants to feed her all the time.”

Head over to our Facebook page @EntertainmentDailyFix and let us know what you think of our story and Robbie’s beat-boxing!