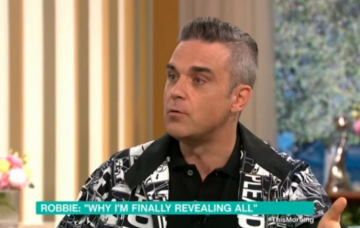 He was a guest on Tuesday's episode of This Morning

Robbie Williams spoke about his World Cup blunder during Tuesday’s This Morning.

The pop singer caused some controversy when he lifted his middle finger to the camera in a rude gesture as he performed at the World Cup opening ceremony last week.

Speaking to hosts Holly Willoughby and Phillip Schofield, Robbie addressed his actions, admitting he doesn’t know “what I’m going to do at any time.”

Phil asked the star: “How was Russia?”

Robbie, 44, jokingly replied: “It was really good. I did the opening ceremony of a thing called the World Cup.

“I thought to myself, ‘It’s really important at these kinds of things not to cause an international incident’ and I didn’t.”

This Morning then showed the photo of Robbie swearing at the camera.

Robbie said he was just counting down the minutes until the match’s kick-off.

He explained: “There was a minute to countdown, so I did a one minute countdown.

“I can’t trust me! The last thing I said to my manager before we sat down on the sofa here, was ‘What could go wrong?’”

“Nothing pops into my head. There is a block between me and sense. Then something happens and then five minutes later, ‘I did, didn’t I?'”

Phil then asked the star if he would consider doing a live TV job on The X Factor.

It’s been reported Robbie and Ayda would replace long-serving judge Louis Walsh and singer Nicole Scherzinger on the judging panel.

Robbie replied: “If there is an X Factor in my future, whether it be this year or next year or never, I’m scared for my own safety and health.

“Not because of the public… [but] my wife. She is an A+ student from Beverly Hills, incredibly square, she is like ‘why would you do that?’”

Addressing the reports that he and Ayda are becoming judges, Robbie added: “She is supposed to be doing it with me. I have read those reports too.

“There is a lot of me that would love to do it. But as it happens, people are talking, nothing has been signed. But watch this space.”

The star revealed he and the show’s boss Simon Cowell have hung out and spoke about “a lot of things.”

Robbie went on to discuss being a husband and a dad.

Gushing about his wife, he said: “I look after her and she looks after me and that’s the way that love works and that it should be in a relationship.”

The former Take That star admitted he wasn’t keen on getting married or having children before meeting Ayda.

“Here I find myself being a father of two and being married to a wonderful women. It comes with its heartaches and headaches and tiredness.