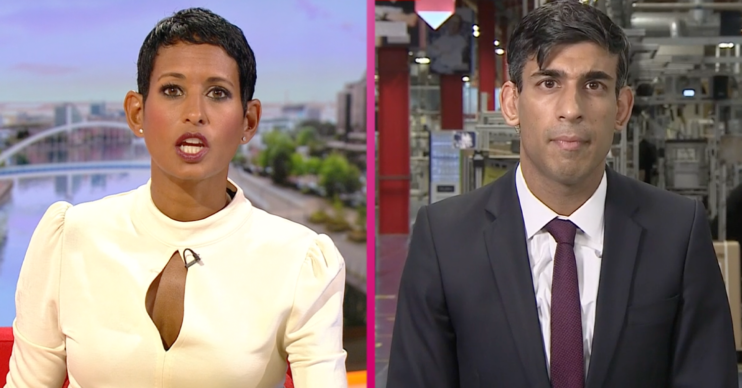 He's gone from 'hero to zero'…

Chancellor Rishi Sunak caused quite the Twitter stir after his interview with BBC Breakfast host Naga Munchetty this morning (July 9).

The politician was on the show to discuss the so-called mini budget he unveiled yesterday.

In it, he announced the Eat Out to Help Out scheme, where Brits will enjoy half-price meals at restaurants Monday to Wednesday.

After he made the announcement, Rishi popped along to a branch of Wagamama – and viewers took exception to the clip when it was shown on BBC Breakfast.

“So you have just shown the chancellor serving at a restaurant, wearing no mask, no social distancing and none of the staff serving or working in the kitchen had masks or keeping any sort of distance from each other. I’m sorry I just don’t get it!!!” tweeted one.

“I thought exactly the same – you wouldn’t mind if they explained why it’s okay to do this,” they said.

#BBCBreakfast asks what could be a better photo opp. Than Rishi Sunak serving a meal in a restaurant? How about if he wore a mask?

Others branded Rishi “obnoxious” after he told Naga he couldn’t hear her questions. He was being interviewed live from a factory floor.

She was trying to tell the chancellor about a self-employed curtain maker who is so worried about money he has considered taking his own life.

Twitter accused Rishi of not caring about the man, Mark Whitaker, and not wanting to “deviate from his script” on the matter.

“Well done to Naga Munchetty for persevering with the obnoxious Rishi Sunak who doesn’t care about Mark Whitaker,” said one who praised Naga’s interview skills.

“I can’t get my head around how the Chancellor expects anyone to survive on zero income”
This is what the Chancellor Rishi Sunak had to say when we put self-employed Mark’s concerns to him on #BBCBreakfast ⤵️
More here: https://t.co/4HnJdiBF94 pic.twitter.com/0x6t5oaB43

“He won’t deviate from his script. It’s just ‘message bingo’ to him. He’s a disgrace just like the rest of the rotten government,” he added.

‘I’m sorry Naga, I’m struggling to hear you.’ Don’t conduct a interview from inside a factory then.

“He’s brilliant at avoiding questions. We had it all. The ‘sorry I can’t hear you, I’ll tell about something else’. The ‘sh*t she’s trying to get me back on track, keep talking over her’. And the favourite ‘let’s answer a different question’,” said another.

“From hero to zero”

“Shame on you Rishi Sunak!” another tweeted.

“‘I’m sorry Naga, I’m struggling to hear you.’ Well don’t conduct a bloody interview from inside a factory then, k**bhead,” raged another.

#RishiSunak seems to have gone from hero to zero in a very short space of time. The ability to string 2 sentences together (rare in the Tory Party), pseudo-largesse (easy to do with other people’s money) and slim-fitting shirts aren’t everything. #BBCBreakfast

How can we expect Rishi, who owns 7 houses and is a multi-millionaire, to represent normal people? He’s never going to introduce anything that penalises others like him so of course it’s “normal” people who are left behind. #BBCBreakfast #ToryValues

“Naga grilled him over a viewer saying people are close to suicide because there is no help for 3m self employed and he’s out of all money! Rishi just brags about how helpful he’s been,” said another.

Yesterday Brits slammed Rishi’s plan to get the restaurant industry back on track as too little too late.

One person tweeted: “‘Sorry your nan died and you weren’t allowed to go to the funeral, here’s 50% off Toby Carvery.'”