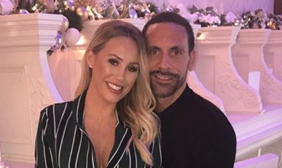 Some people reckon he was lying...

It might not surprise you to learn that Rio Ferdinand and Kate Wright have been working out in Rio’s home gym again.

The former Manchester United footballer shared a video to Instagram that showed the celebrity couple being put through their paces by Rio’s (unseen) personal trainer, Mel Deane.

And as per usual, fans of the pair were glued to their screens, probably looking for clues that Kate and Rio are planning on getting married, having kids or furthering their relationship in some other way.

Well, they DID spot something in the clip – but it wasn’t what you might expect.

Rio – who retired from football in 2015 – is working flat out to get in shape for his next big adventure.

The 39-year-old is due to make his debut in the boxing ring next month.

And sharing the training video with his Instagram followers, he revealed that he and former TOWIE star Kate had made a very early start in the gym.

He wrote: “5am workout this morning… @meldeane12 getting us through it!!!”

But his fans were left scratching their heads, as the video clearly showed that it was broad daylight outside.

And at 5am in the middle of winter, that’s practically impossible!

One wrote: “How come it’s daylight where you are at 5am?”

Someone else commented: “Must have some good floodlights that make it look like daytime.”

But not everyone doubted Rio’s claim, and one follower mocked: “Are people seriously so dim they don’t realise the workout could’ve started at 5am and that this was a couple of hours in?”

Father-of-three Rio has had a torrid few years, with his beloved wife Rebecca Ellison dying of breast cancer in 2015.

As if that wasn’t bad enough, he also lost his mum to the illness last July.

However, his relationship with Kate seems to be getting stronger and stronger. The pair shared some delightfully cosy pictures on social media over Christmas that suggested Kate has really become a part of the family.

And at New Year, she summed up her feelings for Rio and the kids when she wrote: “2017… the hardest but most rewarding year yet! Ups and downs but I have gained four of the most precious people.”