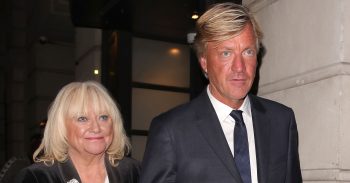 Richard Madeley reveals he and wife Judy have quit drinking

They haven't touched a drop since November

Good Morning Britain host Richard Madeley has admitted that he and his wife Judy Finnigan haven’t had a drink in months.

The presenter, 62, revealed on this morning’s show (April 23rd) they made the healthy lifestyle choice back in November, when they decided to ditch booze for good.

Richard, who is currently standing in for GMB regular Piers Morgan as he enjoys some Easter time off with his family, was hosting a debate about parents drinking with co-anchor Susanna Reid.

They discussed Hollywood A-lister Anne Hathaway’s decision to give up alcohol after having her first child.

Parenting blogger and author Vicki Psarias thought the actress was being extreme and suggested the better option might be “mindful drinking”.

Susanna, who returned to the show today without Piers, admitted she’s drinking mindfully and said she’s only had eight drinks in the last eight months.

But she warned that mums already have enough “to feel guilty about” and told the others it’s understandable for a parent to want a drink now and then.

She said: “After a long day, when you are completely run ragged, I completely remember that feeling of needing to take the edge off.”

Susanna gave up alcohol last summer after visiting the doctor about her skin and receiving a stark warning about the effect that regular drinking has on the body.

Her GP told her that, among other things, booze can cause blood vessels to burst and leave a drinker with permanent facial scarring.

Offering his take, Richard explained: “Well, Judy and I stopped. We stopped in November. And we found fantastic non-alcoholic wines, which are pretty good.

“It looks nice. It occupies the space on the table where real wine used to go. It’s a prop.”

Chloe is a personal trainer with her own fitness podcast, The Bodcast, and lifestyle book The Fat Loss Blitz.

She also regularly posts pics of her toned physique for her 192k followers on Instagram.

Last December, Chloe got married to rugby player James Haskell. She told Hello magazine about Richard’s role in her big day: I’m a daddy’s girl and he was so looking forward to driving me to church – a tribute to our father-and-daughter road trips.

“He’s just like me, sentimental and nostalgic. I even caught him watching the film Father Of The Bride.”

What’s your opinion on people quitting booze once they become parents? Leave us a comment on our Facebook page @EntertainmentDailyFix and let us know what you think of this story.