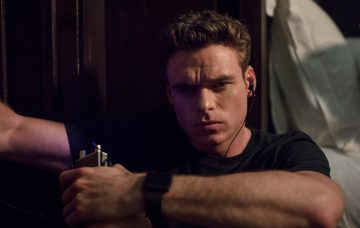 The Bodyguard’s Richard Madden has revealed his raunchy sex scenes in the hit drama sent him mum “hysterical” when she phoned him up to tell him off for not warning her about them. The 32-year –old actor’s character, protection officer David Budd, had steamy scenes with Home Secretary Julia Montague, played by Keeley Hawes where […]

The Bodyguard’s Richard Madden has revealed his raunchy sex scenes in the hit drama sent him mum “hysterical” when she phoned him up to tell him off for not warning her about them.

Speaking on The Ellen DeGeneres show he revealed: “I’ve made a few mistakes in my time, which is neglecting to tell my mother there was going to be a sex scene in a show.”

“Then I get a hysterical phone call of, ‘You must tell me and your father. I had a cup of tea and nearly spilled it!'”

He continued: “Now she covers her eyes. It’s not fun for her. They are never happy about the butt!”

The Bodyguard, which has been snapped up by Netflix was the year’s biggest drama pulling in 11 million viewers for its finale in September and earning Richard a Golden Globe nomination.

Speaking about the moment he received the news, Richard revealed: “I was in the studio recording a voice-over for a World War II dram, which was very serious, and yeah, it caught me by surprise. I had to try and bring myself down. It was a lot of adrenaline.”

Richard, who appears as Elton John’s manager John Reid in the upcoming biopic Rocketman, is also rumoured to be in the running to bag the coveted James Bond role when Daniel Craig stands down.

When asked if he would like to be the new 007, Richard confessed: “I’m more than flattered to be mentioned, for people to consider putting me in that role. It’s a brilliant thing to be in. I love the movies. I’ve read all the books.”

Read more: Keep up to date with all the latest news on your favourite dramas on Entertainment Daily

In the meantime a second series of the Bodyguard is in the works with Richard revealing he’s already had talks with show creator Jed Mercurio.

He says: “Jed and I have been talking about it. It’s been kind of mad this year so we’ve got next year to throw some ideas together and talk so hopefully so.”

Do you think Richard would make a good 007? Leave us a comment on our Facebook page @EntertainmentDailyFix and let us know what you think!