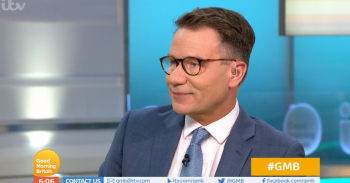 Richard Arnold was left unimpressed as he saw what he may look like in 20 years time.

During Tuesday’s Good Morning Britain, the presenter and his co-stars Susanna Reid, Charlotte Hawkins and Richard Madeley were shown computer-generated pictures of themselves.

The photos revealed how they were predicted to look in the year 2040.

Richard’s photo showed him bald with some grey hair on the side of his head.

Speaking about the snap, Richard said: “This is the respect I have here at GMB,” as the photo popped up.

He continued: “A very old Ian Duncan Smith smoking about 80 oily rags a day, judging by that. It’s the hair!”

Susanna wasn’t impressed with her photo either, and claimed there was one mistake about it.

She was shown with grey hair replacing her brunette locks and her face featuring a few wrinkles.

But Susanna vowed she would never let her hair go grey, and will dye her locks.

She said: “I will never knowingly be without hair dye, so I’d just like to point out that’s not gonna happen.”

Meanwhile on the show, Richard made a joke about Susanna’s age during a discussion about whether it was possible to be a good parent and consume alcohol in moderation.