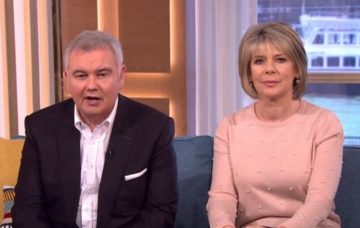 He's known to be a huge fan of the show!

Eamonn Holmes has denied he was offered £800,000 to take part in Celebrity Big Brother.

The Northern Irishman, 58, is a known fan of the Channel 5 reality show so it’s understandable bosses would be keen to sign him up.

But chatting on Tuesday’s episode of This Morning, the TV star branded claims he’s been approached for the show as “fake news”.

Eamonn explained: “The fee they apparently offered me is £800,000. To which I’m supposed to have said, ‘I don’t need the money’.

“Folks, let me tell you the words you will never hear from lips is, ‘I don’t need the money’.

And, unable to resist yet another reference to his OBE, the star quipped: “The thing is, the honour has probably raised my fee, my asking price!”

Wife Ruth Langsford then chipped in to say Eamonn isn’t allowed to do Celebrity Big Brother.

“I wouldn’t miss him for that long,” she said, “I just think they’d have you in your pants and snoring.”

Eamonn retorted: “You worry about me being a sex symbol, strutting around like David Gandy in my undies?”

Sadly, we think he was just joking!

The new series of Celebrity Big Brother kicks off this evening on Channel 5, with a big twist!

To represent 100 years since women got the vote, launch night will see only female celebrities entering the house.

Male contestants will reportedly be introduced after four days.

So far, the line-up has been kept under wraps, apart from journalist Rachel Johnson – sister of Boris and daughter of I’m A Celeb’s Stanley – who has confirmed her participation.

Emma Willis returns to host while Rylan Clark-Neal is back on duty on spinoff show, Big Brother’s Bit On The Side.