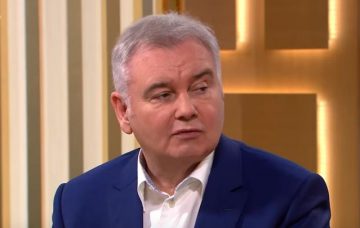 After missing his regular slot on the This Morning last week, Eamonn Holmes took to social media on Friday night to tell fans he was suffering from shingles disease.

Sharing a photo on Instagram, fans were shocked to see that Eamonn’s face is not only red and swollen, but covered in painful looking blisters.

The TV host, 58, even joked that his swollen eye makes him looks like he’s been in a fight!

He wrote: “I know it looks as though I’ve been in a scrap but honestly I haven’t. It’s worse than that – it’s shingles.”

Fans were quick to send Eamonn their well-wishes and hopes for his speedy recovery, while others who had experienced the illness sympathized over his visible discomfort.

“Ouch, hope the pain settles soon. It has to be one of the most painful things I’ve ever experienced,” wrote a fellow sufferer.

Another added: “Wow! That looks so painful, hope it doesn’t linger too long for you! Make sure @ruthlangsford is fulfilling a nurse’s role for you.”

Others also noted that Eamonn’s elsdest son Declan, from his first marriage, is set to wed this year.

Although the date hasn’t been confirmed, one fan added: “Get well soon, that looks very sore. Rest up before your son’s wedding.”

From the same strand of infection as chicken pox, although not as common, the symptoms of shingles can include burning pain, inflammation, and as evident on Eamonn’s picture, a blistering skin rash.

A bout of shingles usually lasts from two to four weeks, so Eamonn could be off sick for the rest of the month.

Although not as catching as chicken pox, shingles is also contagious before the rash scabs over, so if Eamonn’s wife and co-host, Ruth Langsford, has come into contact with his skin, she could also catch the illness.

Eamonn’s spot has currently been taken by the show’s celebrity correspondent, Rylan Clark-Neal.

But if Ruth were to also fall ill, the ITV show could find itself in chaos, as the show’s other regular hosts, Holly Willoughby and Philip Schofield, are currently on holiday with their families in Portugal.

Ruth and Eamonn were supposed to be covering Holly and Phil’s weekday spots while the pair were on holiday – and their Friday slot is being guest-hosted.

Taking their Friday spot last week, were Gok Wan and Rochelle Humes, and viewers loved them!

You better get well soon, Eamonn!

Do you think Ruth and Rylan are making a good presenting duo? Or are you missing Eamonn’s cheeky charms? Leave us a comment on our Facebook page @EntertainmentDailyFix and let us know what you think!