She got viewers talking

I’m A Celebrity… Get Me Out Of Here! star Rebekah Vardy was back on TV last night, commenting on the antics of other celebs on CBB.

She was on the panel of Celebrity Big Brother’s Bit On The Side, hosted by Rylan Clark-Neal.

And, as viewers who watched her on IACGMOOH, became accustomed to, Becky certainly didn’t hold back on her opinions.

However, it was the mum-of-four’s physical appearance, not her forthright views, that really got people at home talking. 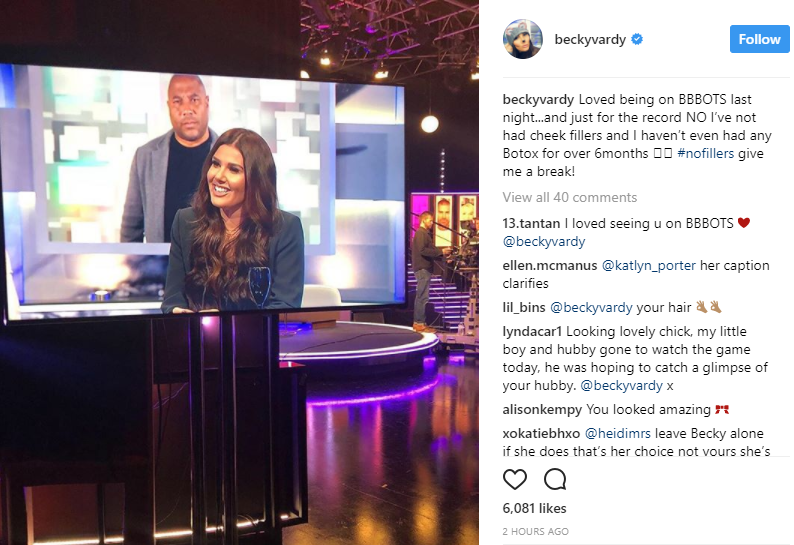 “She’s gone bloody mad on the Botox for the festive season that one,” one suggested.

Of course, she wasn’t going to let these comments pass, without responding.

And she brought two barrels! Posting to Instagram, she shared a pic of her on the Channel 5 show’s panel, alongside a message.

“Loved being on BBBOTS last night… and just for the record NO I’ve not had cheek fillers and I haven’t even had any Botox for over 6months,” she wrote.

She then paid off with a very succinct “give me a break”.

There was plenty of love for the 35-year-old after her stint on the show.

One fan said: “Looking fabulous on # bbbots Rebekah Vardy !!! You’d be great in the house.”

Good point, forget the spin-off show, get her in the mix with India, Ann and Amanda – now that would be a talking point!