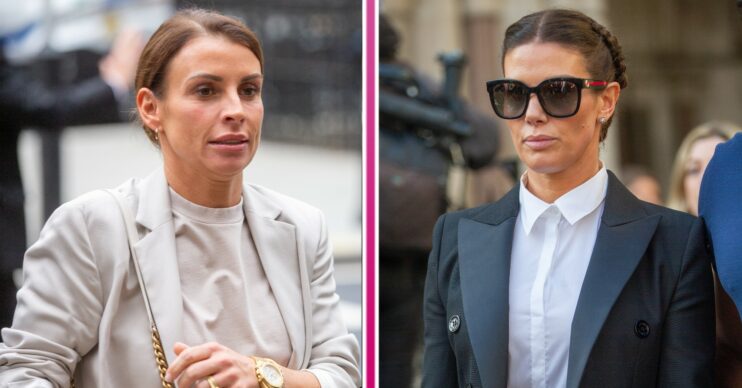 She's trying to turn the defeat into a positive

She might have lost but Rebekah Vardy is reportedly set to use her defeat for a career comeback after her Wagatha Christie trial.

The footballer’s wife lost her case against fellow WAG Coleen Rooney for libel with the verdict delivered on Friday (29 July).

However, Rebekah is trying to gain some positive career steps out of the defeat, with a documentary and book reportedly lined up.

Read more: Wagatha Christie case to be made into a Channel 4 drama?

Sources close to Rebekah Vardy told The Times that the WAG is hoping that a bidding war will break out for a TV programme focusing on her High Court battle with Coleen Rooney.

Currently at least five independent production companies are rumoured to have approached her team about exclusive rights.

Fees are said to have been offered ranging from £5o,000 to £250,000 to secure her involvement. However, the sources claim that the documentary could prove tricky for Vardy’s husband, ex-England striker Jamie Vardy.

There have been so many offers for her

Despite losing her libel case, Rebekah Vardy is still seeing huge interest in her and is likely to capitalise on it.

A source close to her said: “There have been so many offers for her. From documentaries to book offers to TV appearances and two big retail brands wanting to work with her on campaigns.”

It’s not just Rebekah that might lift the lid on the case. Coleen Rooney is reportedly in talks with Netflix, Amazon and Disney for her side of the story. A source close to Rooney claimed that she could earn “several million pounds” from sharing her side of the trial.

What happened in the trial against Coleen Rooney?

The Wagatha Christie trial eventually concluded on Friday July 29. The case originally came from 2019 when Coleen Rooney accused Rebekah Vardy of leaking stories about her to the press. Rebekah denied the allegations and sued Coleen for libel.

The case was heard earlier this year, after being dubbed Wagatha Christieby the media in reference to Coleen’s private sleuthing to work out who was sharing stories to the media.

Coleen reportedly leaked false stories in order to work out who was sharing information about her and her family, before accusing Rebekah Vardy’s account publicly on Instagram.

As the verdict concluded the judge ruled in Coleen’s favour, claiming that the essence of Rooney’s social media post accusing Rebekah was “substantially true”.

Coleen: “I was right”

Additionally, the judge also said that it was likely that Rebekah’s agent, allegedly with Rebekah’s help, had leaked stories about Coleen to the press.

After the result of the case was announced, Coleen took to social media with a statement. She wrote: “Naturally, I am pleased the judge has found in my favour in her judgement today. It was not a case I ever sought or wanted.”

Coleen also explained how she had made “constant efforts” to avoid “such a public and drawn out court case”. However, she claims that all her efforts were “knocked back’.

Coleen then went on to add that the leaks from her Instagram account began in 2017. She alleged they continued for close to two years, intruding on her privacy and her family.

Furthermore, she wrote: “Although I bear Mrs Vardy no ill will, today’s judgement makes clear that I was right in what I said on my Instagram post.”

She then went on to thank her legal team, family, friends, and the public, for their support.

What’s your verdict? Head to our Facebook page @EntertainmentDailyFix and tell us what you think of our story.