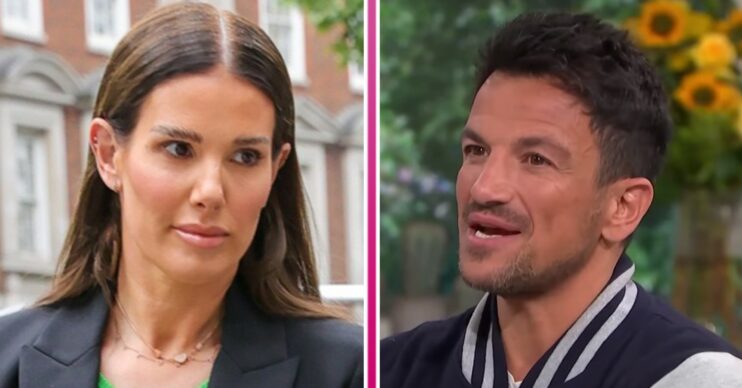 They originally appeared in a 2004 tabloid interview article

Rebekah Vardy has claimed she is “deeply ashamed” for comparing Peter Andre‘s penis to a mini sausage.

She said the comments, which appeared in a 2004 News of the World article, were made “long ago”.

The 40-year-old added during a Talk TV interview she felt the comments had no relevance to her libel case.

She had denied a 2019 accusation by Coleen that her Instagram account was the source of leaked stories. She went on to sue Coleen for libel.

But last Friday (July 29), several weeks after the ‘Wagatha Christie‘ trial came to an end in May, a judge ruled in favour of Coleen.

Since then Rebekah has spoken with the News UK channel and addressed her “regret” for being associated with a kiss and tell tabloid story.

What did Rebekah Vardy say about Peter Andre and his penis?

Rebekah was presented with a printout of the article from nearly two decades ago during the trial.

Asked if she thought whether her comments were “respectful”, she claimed: “I was forced into a situation by my ex-husband to do this and it is something that I deeply regret.”

However, her former husband Steve Clarke subsequently denied her High Court testimony to a newspaper.

And Peter also detailed his anguish at being “the butt of jokes” as he apologised to his family for enduring “hit after hit”.

He also appeared on Loose Women and reflected on how he felt a line had to be drawn on Rebekah’s comments being raised again and again.

‘Life for me was so different then’

However, Peter’s manhood did pop up again in Rebekah’s chat with Talk TV host Kate McCann.

“That was a story I put my name to and that was something I deeply regret and I’m deeply ashamed of,” Rebekah said.

That was something I deeply regret and I’m deeply ashamed of.

She added: “It was so long ago. Life for me was so different then.