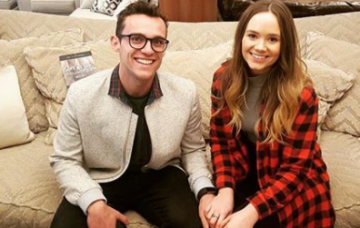 Hollyoaks couple Luke Jerdy and Daisy Wood-Davis have spoken of their plans for the future.

The couple, who play Jesse Donovan and Kim Butterfield on the soap, have said they would love to get married and have children.

Asked by OK! magazine if marriage is on the cards soon, Daisy said: “We speak about it quite often, we’re just excited for the future. I’m more bothered about having babies. I can’t wait to have babies!”

The 27-year-old said she would like to have a “little tribe” of children and Luke, 28 agreed.

Although Daisy joked she should perhaps see how childbirth goes before she commits to a big family!

The pair admitted they’ve already chosen a name for a future child if they have a boy. They said they love the name Jude as he’s a character in one of their favourite books, and Daisy thinks Luke has a resemblance to Jude Law.

As to when they may marry, the couple, who have been together two years, don’t have any plans just yet.

Luke said he wasn’t tempted to go down on one knee on a recent trip they took to Paris as “it’s too cliched for me.”

At the moment, they are enjoying living together in Liverpool with their cat, Pearl.

Luke and Daisy’s full interview is in the new issue of OK!, out now.

They’ve previously spoken of how living and working together doesn’t get too much, as their Hollyoaks characters rarely share the same scenes.

“The work doesn’t take over and we don’t often talk about it, which is good,” Luke told Soaplife.

He added that Daisy does the cooking at home – while he does the clearing up – as she’s a keen chef who runs her own supper club, Dining With Daisy.

Meanwhile, Luke has recently launched his own fitness nutrition programme after getting into shape to train for a half marathon.