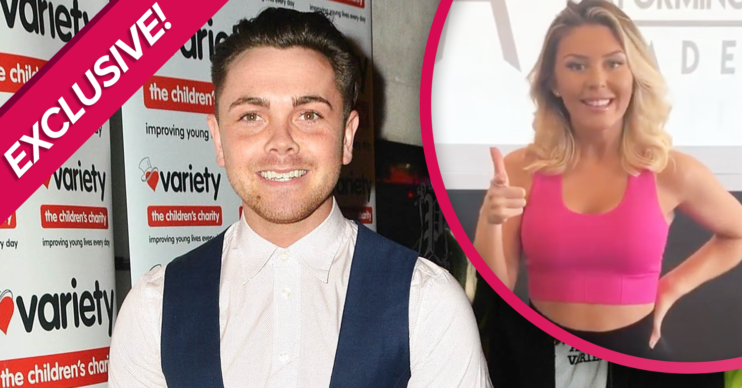 He came second in the 2006 series of The X Factor and is releasing his new album this week, but Ray Quinn has revealed his fiancée Emily has banned him from singing at their wedding.

He said: “Welcome to the family my queen #shesaidyes.”

Now, Ray has told Entertainment Daily how the plans for their big day are shaping up.

And it appears Emily has banned Ray from belting out a tune or two on the big day.

Will Ray Quinn sing on his big day?

“She said no,” Ray exclusively told ED! when we asked if he’d be singing on his big day.

However, you can’t keep a good showman down, it seems…

Stepdad Ray revealed the tot isn’t a fan of his singing and told us: “If I start singing he puts his hand over my mouth.”

The coronavirus pandemic has meant that Ray and Emily have had to put their wedding plans on hold for the time being.

The couple’s families are too big for them to comply with the government’s restrictions on numbers, Ray told us.

“At the moment, with venues, we can’t really look at them, and even if we do we’re only allowed a certain amount of people there.

“With my family and her family that’s not going to happen, so we need to wait till all this goes.

“It’ll be a big day and I’m hoping not too expensive,” the singer and actor quipped.

For now, Ray said the pair are just enjoying “being engaged”.

“We’re enjoying being engaged at the moment so we’re not looking to get married any time soon, we’re not rushing into it.

“We’re enjoying being in love and being engaged and enjoying the process,” he said.

So what about having a baby together in the future?

As well as being stepdad to Lucien, Ray is also dad to son Harry, eight, from his previous marriage to Emma Stephens.

“Never say never, you never know,” he told us exclusively.

“Fate decides that, you’ve just got to live, love and be happy, but never say never.

“I wouldn’t mind,” he admitted with a sly smile. “I’d be happy either way, as long as they’re healthy.”

Ray’s new album Undeniable is out this Friday (August 28).