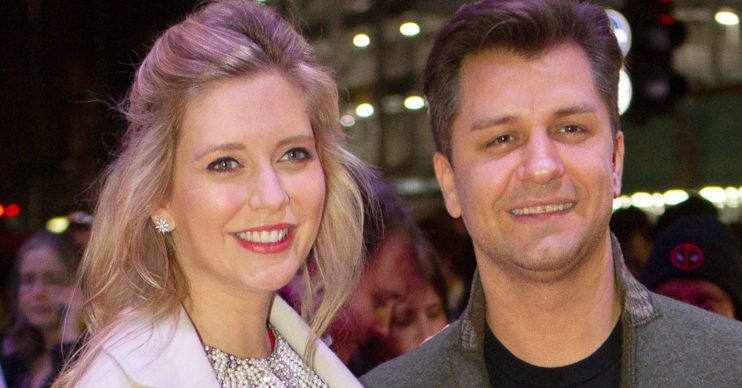 The couple confirmed the happy news on Monday (November 8) after their little girl was overdue by 15 days.

Rachel shared a series of family pictures to Instagram alongside a sweet caption.

One photo showed the couple’s daughter Maven with her new baby sister.

She wrote: “We have some news! Introducing Pasha’s newest dance partner – baby Noa was finally born, 15 days after her due date, late on Friday night to the sound of fireworks!

“She’s totally adorable and her big sister Maven has already tried welcoming her to the world by offering Oatly and pickles, we think that’s a good sign.

“Massive thanks to the wonderful home birth midwives team and my doula who looked after us all so well.

Rachel Riley and Pasha Kovalev met while partnered together for Strictly Come Dancing 2013.

The couple made it through five weeks before being eliminated in the dance-off.

At the time, Rachel was married to first husband, Jamie Gilbert.  However, shortly after her stint on Strictly finished, Rachel announced their plans to divorce.

Jamie and Rachel were together since meeting at Oxford University, but only married 16 months before their split.

Rachel later said the show gave them “distance” after being together from the age of 19.

In September 2014, Rachel and Pasha made their debut as a couple.

They’ve remained together ever since, and in February 2019, Pasha announced he would be leaving Strictly after eight years on the show.

Three months later, Rachel announced via Countdown conundrum she was pregnant with their first child. The message read “R Tiny Mate”, which when solved read “maternity”.

The couple flew to Las Vegas and got married just three weeks later.

“After keeping us waiting she came so fast we didn’t get to hospital & was born in our bathroom with our amazing doula & wonderful St Mary’s midwives rushing over to be with us just in time!” Rachel said in the announcement.

Rachel confirmed her second pregnancy in April 2021, again using a conundrum. This time, it was the far more difficult “Fitt Riley”, which unravelled spells “fertility”.

Ahead of the new baby’s arrival, Rachel revealed she had a miscarriage in between her two pregnancies.