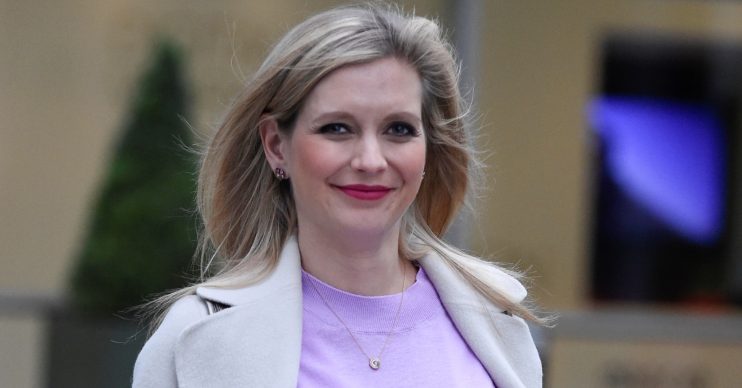 Rachel Riley has taken her baby daughter to work with her on Countdown.

The 34-year-old posted a snap of herself and husband former Strictly Come Dancing pro Pasha Kovalev with their little girl Maven on set of the game show.

In the photo, Pasha is seen holding Maven – who beamed in an adorable yellow outfit – as the Countdown board spelled out “Maven Aria 15 Dec 19,” which is the tot’s first and middle name and date of birth.

Alongside the family pic, Rachel wrote: “First block back at work done and dusted and I can still sum post baby… phew!

“Mave was busy melting hearts and Pash is a hero. The eternal on screen pregnancy has just a month to go!

First block back at work done and dusted and I can still sum post baby… phew!

“Now back to family time for us, we’re really loving it.”

Fans couldn’t get enough of the picture with one person writing: “This is the greatest thing I’ve ever seen.”

A third added: “She looks such a content baby.”

Pasha and Rachel welcomed their baby girl in December.

At the time, Rachel shared a family photo as they posed with their newborn in front of a Christmas tree.

She wrote: “2 weeks after we were expecting her this little one finally made an appearance!

The star added: “After keeping us waiting she came so fast we didn’t get to hospital & was born in our bathroom with our amazing doula & wonderful St Mary’s midwives rushing over to be with us just in time!

The couple announced they were expecting their first child in May last year and a month later, they tied the knot in a ceremony in Las Vegas.

At the time, Rachel said on Twitter: “Introducing the new Mr and Mrs Kovalev. We both said yes!”

The pair met when they were partnered on series 11 of BBC’s Strictly in 2013.

The following year, Rachel and Pasha – who quit Strictly in 2019 – became romantically involved after she had separated from her husband of one year, Jamie Gilbert.