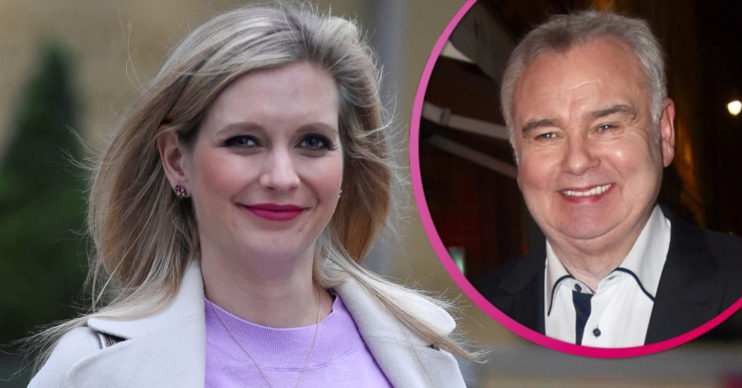 It's not the first time they've had beef

Rachel Riley has laid into Eamonn Holmes after he spoke about wacky coronavirus 5G conspiracy theories on This Morning.

Eamonn faced a backlash when he made the comments last month.

He was talking about a theory which links the launch of 5G with the outbreak of COVID-19.

Read more: I’ll Get This: Eamonn Holmes’ controversial 5G comments come back to haunt him

Some conspiracy theorists believe electromagnetic radiation coming from 5G towers are the real cause of the symptoms of COVID-19, rather than a virus.

That’s despite information debunking such claims being widespread online.

Eamonn even criticised “the mainstream media” for automatically dismissing the theories. He said this even though he presents an ITV prime time show.

But Rachel said it was “dangerous” to spread conspiracy theories.

Not the first time

She told Radio Times that she fell out with Eamonn Holmes when he had David Icke on his radio show.

“I’ve also been working on some anti-misinformation campaigns for Stop Funding Fake News,” she said.

“There are a lot of people trying to make money by spreading lies about coronavirus, whether it’s quack remedies or stupid conspiracy theories about 5G. It’s dangerous, especially when these things get repeated on shows that you’re expected to trust.

You don’t expect to see ridiculous theories about 5G being repeated on This Morning.

“I’ve fallen out with Eamonn Holmes before, when he had David Icke on his radio show.

“But you don’t expect to see ridiculous theories about 5G being repeated on This Morning.”

At the time, NHS England Medical Director Stephen Powis said the conspiracy theories are “the worst kind of fake news”.

The regulator issued guidance to This Morning following an investigation into the comments.

At the time, Eamonn said on the show: “I want to clarify some comments that some of you may have misinterpreted from me.

“I want to make it clear there’s no scientific evidence to substantiate any of those 5G theories.

What do you think – was Rachel right? Go to our Facebook page @EntertainmentDailyfix and leave a comment to let us know how you feel.