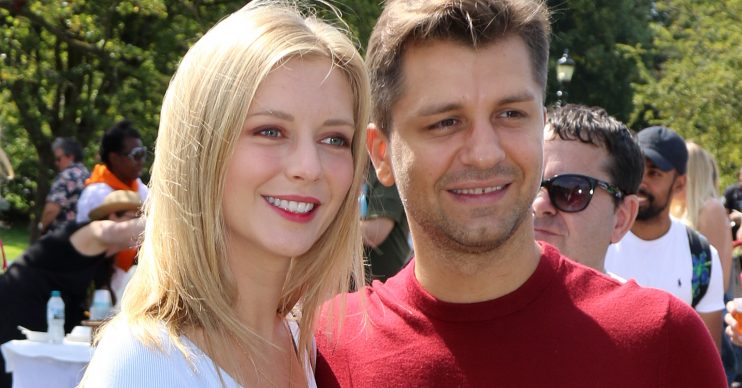 Countdown’s Rachel Riley has announced the birth of her first child.

The 33-year-old presenter and her husband, former Strictly pro Pasha Kovalev, 39, have welcomed a little girl and the couple said they “couldn’t be more in love”.

In a post on Instagram, Rachel wrote: “2 weeks after we were expecting her this little one finally made an appearance!

2 weeks after we were expecting her this little one finally made an appearance! Miss Maven (one who understands) Aria (lioness) Riley Kovaleva arrived on Sunday morning weighing in at 7lbs 4. After keeping us waiting she came so quickly we didn’t have a chance to get to the hospital and was born in our bathroom with our amazing doula and wonderful St Mary’s midwives rushing over to be with us in to be nick of time! She’s absolutely perfect and Pasha and I are in newborn bliss. Couldn’t be more in love ❤️❤️❤️❤️👶🏼 #newborn #babygirl #maven #baby

The new mum added: “After keeping us waiting she came so fast we didn’t get to hospital & was born in our bathroom with our amazing doula & wonderful St Mary’s midwives rushing over to be with us just in time!

Rachel then shared a close-up shot of the adorable newborn alongside the caption: “Mave.”

Rachel announced she was pregnant back in May, when she shared the news with a sweet Countdown conundrum posted on Twitter.

The photo showed her cradling a small bump as she stood next to the iconic Countdown board, which bore the letters R-T-I-N-Y-M-A-T-E.

She wrote alongside the photo: “Pash and I have a conundrum for you… you have till December to work it out! We’re over the moon excited.”

Just a few months after announcing the pregnancy, Rachel and Pasha confirmed they had tied the knot.

The couple reportedly wanted to keep the ceremony low-key and even kept it from most of their close friends and family.

A source told The Sun: “They wanted to ensure it was just the two of them and everything was kept as quiet as possible.

Rachel later revealed news of their nuptials on Twitter, sharing a photo of herself and Pasha, and captioning it: “Introducing the new Mr and Mrs Kovalev. We both said yes!”

The pair met when they were partnered on series 11 of BBC show Strictly Come Dancing in 2013.

They survived until week six, when they became the fifth pair eliminated from the competition.

The following year, Rachel and Pasha – who quit Strictly in 2019 – became romantically involved after she had separated from her husband of one year, Jamie Gilbert.