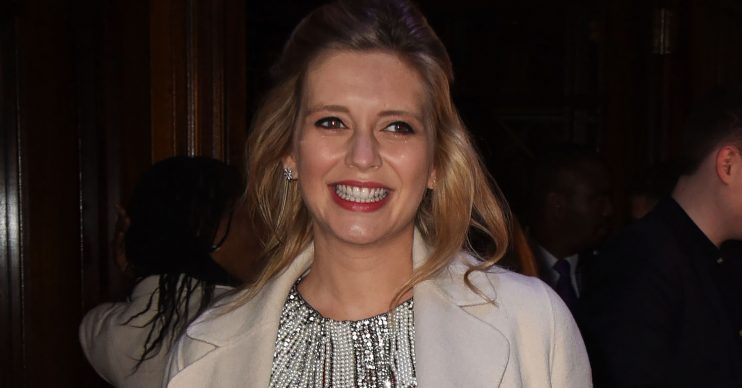 Presenter Rachel Riley has delighted her followers on social media with a photo of baby Maven watching her on Countdown.

The 34-year-old maths whiz, who welcomed her first child in December with former Strictly Come Dancing pro Pasha Kovalev, took to Instagram to post a snap of the tot seemingly ‘hooked’ seeing her mum on the game show.

The snap, posted on Monday (February 3 2020) was captioned: “Our new viewer is hooked! #tvdebut #babybelly #countdown.”

One of Rachel’s followers commented: “What a lovely moment!”

Another said: “Lovely times ahead.”

“Congratulations on such a little beauty,” wrote a third.

Someone else gushed: “Awwww that’s so cute.”

Rachel announced the birth on Instagram with a string of cute pics of herself and Pasha holding little Maven.

And the couple revealed how, two weeks overdue, the tot arrived so quickly that they weren’t able to make it to a hospital.

Rachel ended up giving birth to Maven, who weighed 7lbs 4oz, on their bathroom floor – with midwives coming to their aid just in the nick of time.

Our new viewer is hooked!

She told her fans: “Two weeks after we were expecting her this little one finally made an appearance!

The new mum added: “After keeping us waiting she came so fast we didn’t get to hospital and was born in our bathroom with our amazing doula and wonderful St Mary’s midwives rushing over to be with us just in time!

“She’s absolutely perfect and Pasha and I are in newborn bliss. Couldn’t be more in love.”

Rachel and Pasha met as partners on series 11 of Strictly Come Dancing in 2013.

In July last year, the couple tied the knot via a secret wedding service in Las Vegas and enjoyed a ‘minimoon’ together in Spain.