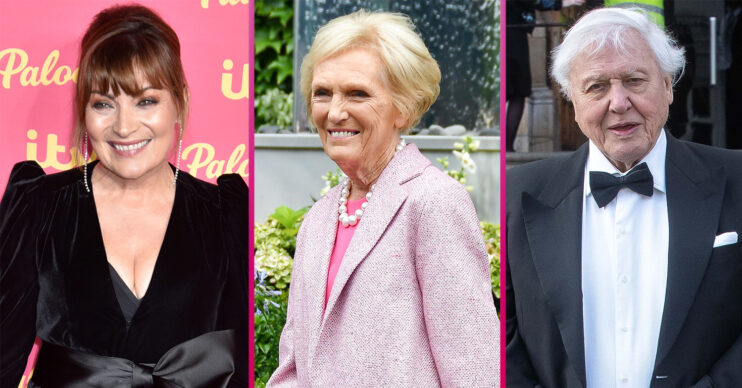 Lorraine Kelly, Mary Berry and Davis Attenborough have all been recognised

The list, which recognises achievements of people across the UK, is usually published in June when Her Majesty, 94, celebrates her birthday.

However, this year, it was postponed because of the coronavirus pandemic.

What have celebrities said about making The Queen Birthday Honours List?

Mary will receive a damehood for services to broadcasting, the culinary arts and charity.

I am sure they are looking down and smiling.

She said: “I just wish my parents and brothers were here to share my joy, as my only achievement at school was just one O-level – in cookery of course.

“However, I am sure they are looking down and smiling.”

Meanwhile, Sir David Attenborough will receive an upgrade to Knight Grand Cross for services to broadcasting and conservation.

In addition, actress Maureen Lipman, 74, will receive a damehood for her services to charity, entertainment and the arts.

England and Manchester United footballer Marcus has become an MBE for campaigning for the government to allow millions of children to claim free school meals during the summer holidays.

Meanwhile, Dr Hilary Jones will receive an MBE for his work on Good Morning Britain during the pandemic.

He said: “I feel humbled and delighted in equal measure to be afforded this honour.

“I can only hope that my work in public health broadcasting and in medical practice over the last 40 years is truly worthy of it, in the full awareness that others from many different walks of life are even more deserving than myself.

“I shall continue this work for which I have an enduring passion and will continue to support the various amazing charities in which I am involved.

Body Coach Joe Wicks will receive an MBE by the Queen for raising thousands for the NHS during lockdown with his daily YouTube workouts.

He told PA: “I can’t quite believe it … To receive this is just incredible.

“I’m so proud that I’ve done something which helps so many people.

“I haven’t even told my mum and dad yet, so it’s a surprise for them and I hope they are going to be proud of me.”

Who else will receive honours?

Phil Redmond, the creator of Grange Hill, Brookside and Hollyoaks, will receive a knighthood for services to broadcasting and arts in the regions.

She said: “I’m pleased that it’s come on the back of Gentleman Jack because I’ve been working on that for 20 years.

“For me, it’s been the highlight of my career to be able to write about Anne Lister, so I feel quite emotional, I didn’t expect that.

“So for it to come on the back of that, for me, has been really quite beautiful actually.”

Meanwhile, rapper Dizzee Rascal has received an MBE for services to music.

Singer and EastEnders star Mica Paris will receive an MBE for services to music, entertainment and charity.

Tommy Steele will receive a knighthood for services to entertainment and charity.

What is the difference between MBE, OBE and CBE?

The three honours are different ranks in the Order of the British Empire.

The highest ranking of the three is a CBE (Commander of the Order of the British Empire).

This is followed by an OBE (Officer of the Most Excellent Order of the British Empire).

Meanwhile, finally, third ranking is MBE (Member of the Most Excellent Order of the British Empire).