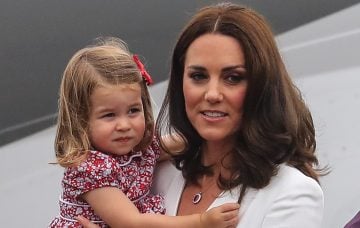 The young royal was said to be holding her mum's hand

The Duchess of Cambridge left drinkers at a local pub speechless when she popped in with daughter Princess Charlotte to use the toilet.

The fourth-in-line to the throne was with Kate while driving through South London and, like most parents, the Duchess was forced to find the nearest place for her three-year-old daughter to go to the loo.

Maggie McKinney, a regular at the Phoenix pub in Stockwell, told MailOnline: “I was sitting in my usual chair and when I looked up I saw Kate Middleton, I mean the Duchess of Cambridge and her daughter Princess Charlotte.

“The little kiddie just trotted in with her mum, went to the toilet and then trotted out. They cold not have been in the pub for more than ten minutes. 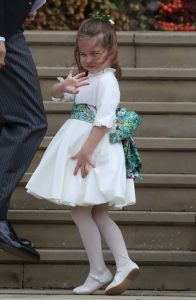 A woman, believed to be a protection officer, entered the pub first to ask bar staff if a little girl could use the bathroom.

But punters were stunned when Princess Charlotte wearing a blue skirt, white blouse and light blue coat, accompanied by Kate in blue culottes and a navy top strolled into the boozer.

The 36-year-old royal, who is rumoured to have an ongoing feud with her sister-in-law Megan Markle, treated her daughter to a more festive trip out last week when they attended a special performance of The Nutcracker at The Royal Opera House.

Charlotte and Kate, who is also mum to five-year-old Prince George and seven-month-old Prince Louis, saw a special pre-rehearsal performance of the Royal Ballet. Kate also revealed that the young royals can’t wait for Christmas.

At an event in Leicester last week, she revealed: “They’re getting excited for Christmas time because they’ve started all their Christmas songs and the Christmas trees are going up. It was really sweet.”

Have you had an unlikely Royal encounter? Leave us a comment on our Facebook page @EntertainmentDailyFix and let us know what you think!