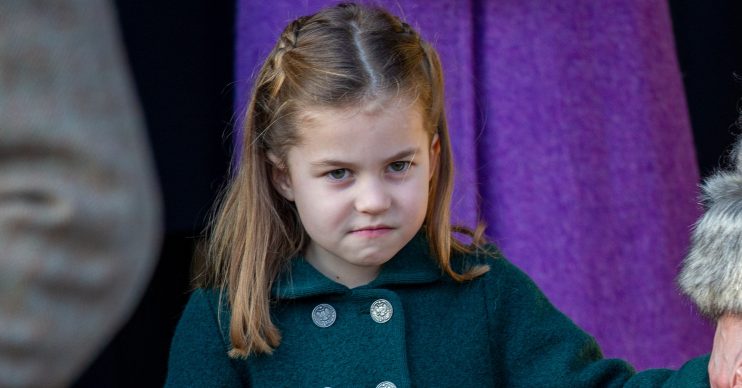 The young royal, four, attended the service in Sandringham with her brother Prince George, six, and parents the Duke and Duchess of Cambridge.

In one touching moment, Charlotte hugged a woman in a wheelchair as crowds gathered outside Mary Magdalene Church following the service.

Speaking to reporters, the woman, Gemma Clark, described the moment she received a hug from the princess.

According to the Mirror, she said: “It was amazing. I’ve been waiting for this day for a long time. I’ve never seen the Royal Family before.”

I’ve been waiting for this day for a long time. I’ve never seen the Royal Family before.

She also gave Kate some roses and Charlotte an inflatable pink flamingo.

Charlotte was presented with more gifts from members of the public.

She looked adorable in a green coat with navy tights and shoes while George looked cute in a blazer and jumper.

Meanwhile, Karen Anvil – who famously took the photograph of the the Sussexes and Cambridges attending the service together last year – spoke about Charlotte and George’s incredible manners.

According to the Evening Standard, she told reporters: “I asked Charlotte if she would like the doll. She came over with her mum. She took the doll, she loved the doll.

“The manners are outstanding. She’s cheeky.”

Speaking about Prince George, she added: “I would say he was more anxious. His manners were perfect.”

Kate and Prince William‘s youngest child, son Prince Louis, didn’t attend the service as he’s too young so it’s been said he stayed at home with Kate’s parents.

The Duke and Duchess of Sussex didn’t attend this year as they’re enjoying Christmas in Canada with their son Archie and her mother, Doria Ragland.

Read more: Inside the Duke and Duchess of Cambridge’s Christmas Day with their kids

The Duke of Edinburgh, 98, was admitted to King Edward VII hospital on Friday “for observation and treatment in relation to a pre-existing condition”.

He left on Christmas Eve and reportedly travelled to Sandringham in time for Christmas Day.