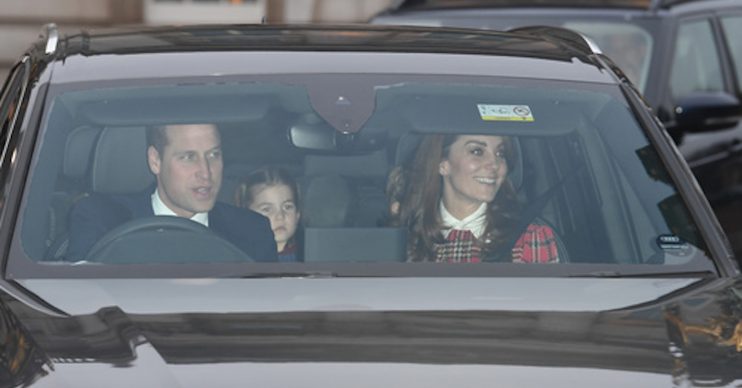 William and Kate beam as they attend Queen’s Christmas lunch with George, Charlotte and Louis

The Duke and Duchess of Cambridge and their three children drove away from Buckingham Palace in one car this afternoon, having attended the Queen’s annual Christmas lunch with a host of other royals.

Prince William was behind the steering wheel as the young family left the Palace, with Kate Middleton beaming widely as she sat in the passenger seat.

Prince George, six, Princess Charlotte, four, and Prince Louis, nearly two, could also be spotted in the vehicle’s back seat – a very different arrangement to how the family arrived for the festive celebrations.

Kate, 37, had driven herself and Charlotte to the bash, according to press photos taken as they arrived for the event – while George turned up with his dad, who was also in command of their ride to Buckingham Palace.

For that journey George sat in the front with his dad, also 37, while Louis travelled with his mum.

Wills’ uncle, Prince Andrew, was also snapped as he made his way to the Palace but was not photographed as he took his leave.

It has been speculated the afternoon may have been an awkward one for several members of the royal family following the spectacular fallout from Prince Andrew’s Newsnight interview last month.

Also thought to have been in attendance for the afternoon after having been seen departing the Palace were Andrew’s daughters Princess Beatrice and Princess Eugenie, and Camilla the Duchess of Cornwall.

They were also joined by Prince Andrew, Sophie Countess of Wessex and their daughter Lady Louise Windsor.

Prince Charles is also expected to have been present.

However, Prince Harry and Meghan Markle were not on hand to pull crackers with as it is believed the Duke and Duchess of Sussex are yet to return from their break in the US.