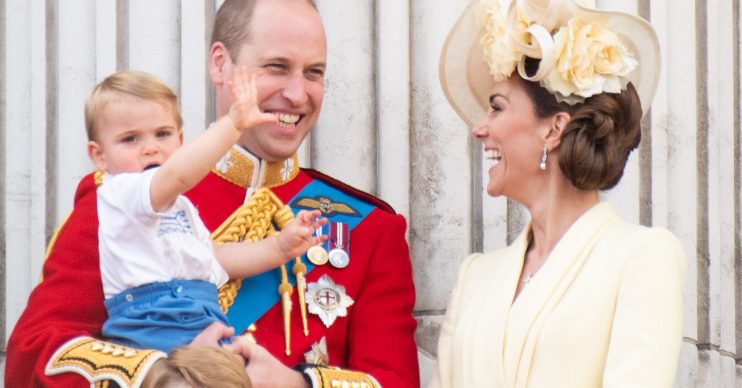 It was an early start for the young family

It’ll be a busy Christmas Day for the Duke and Duchess of Cambridge, who no doubt woke up today to three very excitable children.

Prince George, six, Princess Charlotte, four, and one-year-old Prince Louis are spending today at Sandringham with much of the rest of the royal family.

Last year, Kate told a well-wisher she was up “very early” opening presents with her kids.

And we expect the tots have been spoilt rotten by Kate, Wills and grandparents Charles and Camilla.

Christmas fan Kate got the festive party started early this year when she visited a Christmas tree farm with one of the charities she supports.

She was seen picking out Christmas trees for families, only to be told by some youngsters that she hadn’t picked out a big enough tree.

We wonder if the same happened in their Anmer Hall home in the run-up to the big day!

Christmas started early at the Queen’s country retreat this year, as members of the royal family gathered on Christmas Eve to exchange presents.

An insider revealed that they all meet in the drawing room at teatime and swap gifts, which are meant to be as light-hearted as possible.

Kate is sure to show her funny side having once gifted Prince Harry – who was single at the time – a grow your own girlfriend kit.

However, we’re not sure if the pony that Princess Charlotte requested was allowed inside the Queen’s lavish home!

A source told Closer: “She’s asked for a pony, but might have to wait until next year because William thinks she’s too young.”

On Christmas morning, fans got their first glimpse of the famous family as they attended the morning service at St Mary Magdalene church on the Sandringham Estate.

This morning The Prince of Wales, The Duke and Duchess of Cambridge, Prince George and Princess Charlotte joined Her Majesty The Queen and Members of the @RoyalFamily for the Christmas Day church service at St Mary Magdalene Church in Sandringham. pic.twitter.com/cdhrh0OJub

After that, it was home for another outfit change for Kate – the first of many today.

She’s asked for a pony, but might have to wait until next year because William thinks she’s too young.

The family enjoy their traditional Christmas lunch at 1pm and they sit down together to watch the Queen’s speech at 3pm.

They are also expected to spend the day playing games such as charades, before enjoying a cold cuts buffet at 8.15pm.

We wonder if Kate and Wills will find time to sit down to watch the Strictly Come Dancing Christmas special after the duke revealed his wife was a fan of the show.