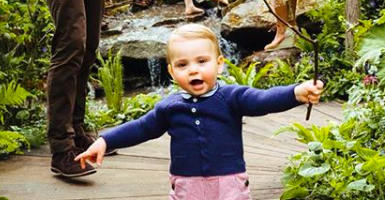 Duchess of Cambridge reveals Prince Louis has started to talk

Duchess Catherine couldn’t help but compare a little boy she met at Peterley Manor Farm in Buckinghamshire – where she was helping children pick out Christmas trees for their classrooms – to her youngest son after the youngster kept trying to get her attention by holding up his hand and said, “Me, me”.

Today, The Duchess of Cambridge became Royal Patron of @Family_Action. Her Majesty The Queen @TheRoyalFamily has passed the patronage to The Duchess having held the role for over 65 years. The Duchess joined children and families supported by Family Action at a Christmas tree farm and helped them to make Christmas decorations, eco-friendly reindeer food, and post their letters to Father Christmas! Her Royal Highness also helped the children find Christmas trees for Family Action pre-schools, before heading back inside for some hot chocolate. Family Action was founded in 1869 to help families in difficulty by giving them practical help and support. The charity works directly with vulnerable or disadvantaged children and families, and provides services including perinatal mental health services, counselling and therapeutic support, and the mentoring of children, young people and adults. The new patronage aligns with The Duchess’s longstanding work on the early years, and the importance of supporting children and families during this seminal period of their lives.

Read More: Meghan and Harry ‘spent Thanksgiving with close family in the US’

Speaking about 18-month-old Louis, the duchess stroked the boy’s cheek and said: “You remind me of my little Louis, he keeps saying, ‘Me, me, me.’ And he wants to come everywhere with me!”

Catherine – who also has Prince George, six, and Princess Charlotte, four, with husband Prince William – also revealed which tree she has at home with her family.

Farm owner Roger Brill told People magazine: “She was asking about the trees which drop their needles and those that don’t, and which ones smell nice!

“She said that they normally have the Nordmann Fir inside that doesn’t drop the needles.”

The duchess helped hold up the trees so the children could look at them properly and impressed the farm owner so much, he joked he’d happily give the royal – who made the visit in her new role as patron of charity Family Action – a job working for him.

He said: “She was fantastic with the youngsters. She was in there moving them around and holding them up.

“I will have to give her a job at the weekend, I think. She was a very good saleswoman!”

Catherine also made eco-friendly reindeer food with the children and admired the Christmas decorations they were making, as well as asking them what they were hoping to find under their trees.

A young girl called Poppy said: “I want a real-life unicorn, a Pegasus one that flies. And a little puppy. And a guitar.”

The duchess replied: “A guitar is very cool, and very sociable because then you can also sing.”