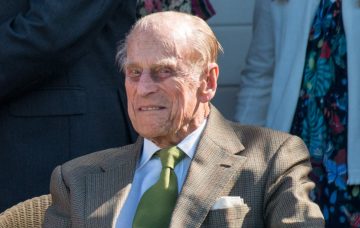 The 97-year-old royal collided with another car last month

Prince Philip has voluntarily given up his driver’s licence after being involved in a car crash last month – with the woman he injured insisting it will make roads safer.

The Duke collided with another car while driving near Sandringham estate in Norfolk in January – leaving his Land Rover flipped over onto its side.

Emma Fairweather was a passenger in the other car and sustained a broken wrist.

The car was also carrying driver Ellie Townsend and her nine-month-old son, both of whom were unharmed.

The Duke was pictured soon after the accident driving while not wearing a seatbelt – earning a caution from Norfolk police.

And now Buckingham Palace has confirmed that the 97-year-old has surrendered his licence to the police.

In a statement, the Palace said: “After careful consideration the Duke of Edinburgh has taken the decision to voluntarily surrender his driving licence.”

The Duke will use a personal driver from now on.

Emma – who recently underwent surgery on her injured arm – praised Prince Philip’s decision, saying he was “making the most sensible decision he can.”

She went on to say she understood how difficult a decision it must have been for him but claimed it would make the roads less dangerous.

“Undoubtedly the roads will be safer now,” she told The Mirror.

“It won’t have been easy for him to make as it is a loss of independence. But he can work around it.”

She had previously complained that the the Duke and the Queen had neglected to properly apologise for the incident, claiming they had an aide call her with their regrets.

But the Duke did eventually send her a personal letter, saying he was “deeply sorry” she had been injured.

Do you think Prince Philip was right to give up his licence? Leave us a comment on our Facebook page @EntertainmentDailyFix and let us know.