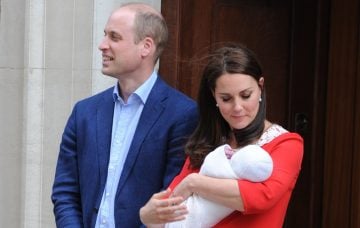 The Duke and Duchess of Cambridge have confirmed their son, Prince Louis, will be christened in July.

The fifth-in-line to the throne will be christened by The Archbishop of Canterbury at The Chapel Royal at St. James’s Palace in London on  Monday, July 9.

A statement released by Kensington Palace said: “The Duke and Duchess of Cambridge are pleased to announce that the christening of Prince Louis will take place on Monday 9th July at The Chapel Royal, St James’s Palace, London.

“Prince Louis will be christened by The Archbishop of Canterbury, the Most Reverend Justin Welby.”

Naturally, royal fans were thrilled by the announcement and fact they may be able to get another glimpse of the little prince next month.

Prince Louis has not been seen in public since Prince William and Kate left the Lindo Wing at St. Mary’s Hospital in London following his birth on April 23.

The little prince was not pictured at his uncle Prince Harry’s wedding to Meghan Markle on May 19, or at Trooping The Colour with the rest of the royal family on June 9.

‪The Duke and Duchess of Cambridge are very pleased to share two photographs of Princess Charlotte and Prince Louis, taken by The Duchess at Kensington Palace.‬ ‪This image of Prince Louis was taken by The Duchess of Cambridge at Kensington Palace on 26th April.‬ ‪The Duke and Duchess would like to thank members of the public for their kind messages following the birth of Prince Louis, and for Princess Charlotte’s third birthday.‬

George was also christened at the Chapel Royal at St. James’s Palace, while Charlotte’s christening took place at the Church of St Mary Magdalene at Sandringham.

Details of Prince Louis’ godparents have yet to be announced.

Meanwhile, little Louis isn’t the only royal baby to be born this year.

It was announced on Tuesday that Zara and Mike Tindall have welcomed their second child, a baby girl whose name has yet to be revealed.

A statement issued by Buckingham Palace said: “Mrs Michael Tindall was safely delivered of a baby girl on 18th June, at Stroud Maternity Unit. Mr Tindall was present at the birth.

“The Queen, The Duke of Edinburgh, The Princess Royal, Captain Mark Phillips and Mike’s parents, Mr Philip and Mrs Linda Tindall, have been informed and are delighted with the news.

“The baby’s name will be confirmed in due course.”

Zara and Mike are already parents to four-year-old daughter Mia. They tragically lost a baby in pregnancy in 2016.

Are you excited to see Prince Louis again? Leave us a comment on our Facebook page @EntertainmentDailyFix and let us know what you think!