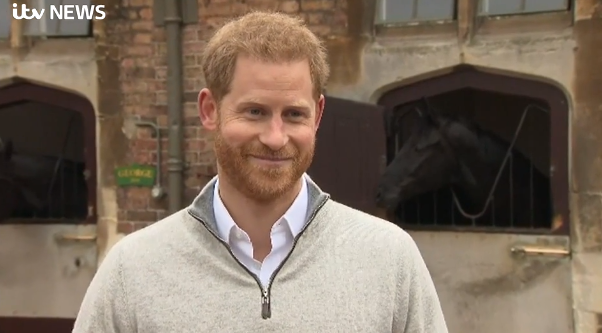 Prince Harry confirms we will get to see the baby on Wednesday!

We can't wait to see his beaming smile!

Prince Harry is planning to step out in public for the first time since the birth of his baby son in two days’ time.

Speaking to reporters about his next steps in fatherhood, he explained his intention to make an appearance with wife Meghan and their firstborn on Wednesday.

“We’ll be seeing you guys in probably two days time as planned, as a family, so everyone can see the baby,” he beamed.

It was reported that the royal couple wanted to spend a couple of days en famille adapting to their new status before introducing their bundle of joy to the world.

A statement from Buckingham Palace explained: “Their Royal Highnesses have taken a personal decision to keep the plans around the arrival of their baby private.

Harry was due to be in Amsterdam on Wednesday and The Hague on Thursday as part of a two-day royal tour; both events were postponed at the end of last week.

Now it looks as though he will be taking part in a very special personal public engagement on one of those days!

Earlier this afternoon, Harry spoke of his joy at becoming a dad, hailing the birth of his son as the “most amazing experience”.

He told reporters at Windsor: “I’m very excited to announce that Meghan and myself had a baby boy earlier this morning, a very healthy boy.

“How any woman does what they do is beyond comprehension, but we’re both absolutely thrilled and so grateful for all the love and support from everybody out there.

“It’s been amazing, so I just wanted to share this with everybody…

“I haven’t been at many births, this is definitely my first birth but it was amazing, absolutely incredible.

Harry confirmed he and his wife are still deciding on a name for their son, and will announce the tot’s moniker in the coming days.

The 37-year-old royal – who was known as Meghan Markle before her marriage to Prince Harry – and her husband welcomed a 7lb 6oz son into the world on Monday (06.05.19) morning, revealing the news just before 3pm on their Instagram account.

A post titled “It’s a boy”, was captioned: “We are pleased to announce that Their Royal Highnesses The Duke and Duchess of Sussex welcomed their firstborn child in the early morning on May 6th, 2019.

According to an official royal statement, the Queen, The Duke of Edinburgh, The Prince of Wales, The Duchess of Cornwall, The Duke and Duchess of Cambridge, Lady Jane Fellowes, Lady Sarah McCorquodale and Earl Spencer have been informed and are “delighted with the news”.

Meghan’s mother, Doria Ragland, is “overjoyed by the arrival of her first grandchild” and was with the couple for the birth.

Leave your message of congratulations on our Facebook page @EntertainmentDailyFix!