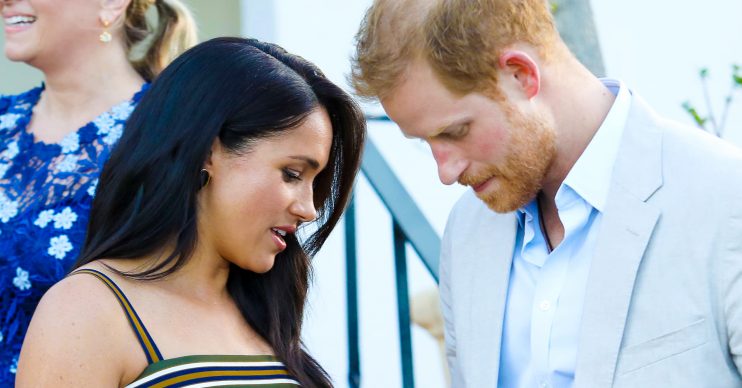 Accompanied by five security personnel for ride to the Sussexes' base

The Duke of Sussex looked overjoyed to be back in the same country as wife Meghan Markle last night as he landed back in Canada.

Prince Harry, 35, was snapped smiling broadly as he got off the plane following reports of more talks with the royal family to discuss his and Meghan’s ‘stepping away’ from public duties.

Meghan and son Archie are thought to have remained in Canada since the announcement about them quitting was made.

According to The Sun, Harry – who swung a holdall over his shoulder after landing – was accompanied by five security personnel for a short ride to the Sussexes’ base on Vancouver Island after touching down.

A Toyota 4×4 – part of a three-car convoy – drove up to the plane steps as Harry disembarked with royal protection officers ahead of other passengers.

The tabloid also claims the sixth-in-line to the throne was so keen to get out of London that he swerved a reception at Buckingham Palace he was expected to co-host.

Harry had been on hand to meet world leaders at the UK Africa Investment Summit – but his brother Prince William was left fronting the bash for 21 African delegations and their spouses after heading off to board his nine-and-a-half hour afternoon British Airways flight.

The royal siblings are reported to have patched up their differences, although Harry is said to be ‘still at war’ with their father Prince Charles over the fallout from his shocking decision.

The Sun quoted an insider as saying: “It’s fair to say that the past week has brought William and Harry back together but the relationship with Charles and Camilla is far more complicated and complex.

We’re not walking away.

“There remains a real lack of trust there and it’s going to take some time to resolve.”

Earlier this week, Harry struck a more sombre tone as he admitted his “great sadness” at stepping down from his role as a senior royal.

He said: “What I want to make clear is we’re not walking away, and we certainly aren’t walking away from you.”

He added: “Our hope was to continue serving the Queen, the Commonwealth, and my military associations, but without public funding. Unfortunately, that wasn’t possible.”

Royal pundits reckon Toronto is a likely destination for a new home for the Sussexes.