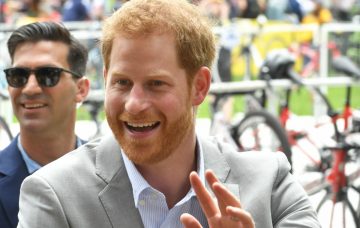 He lost his own mum, Princess Diana, when he was younger

Prince Harry offered some touching words of advice for a little boy who had recently lost his mum.

During a public walkabout in Auckland, New Zealand, on Tuesday, Harry stopped to talk to a six-year-old boy who was amongst the crowds hoping to catch a glimpse at the royal and his wife Meghan.

According to the Mirror, after learning the little boy’s mum had passed away, Harry – who lost his mum Princess Diana in 1997 when he was 12 – told him “life will always be alright”.

The Duke of Sussex told the little boy: “Life will always be alright, you know that? I’ve made it to 34-years-old and life is great.

“I have a beautiful wife and a baby on the way. Your life is going to be sorted, don’t you worry about that.”

Harry also apparently offered support to the boy’s grandmother, who is now a full-time carer of her grandson.

He added: “You’re doing a great job nan. Nans are so important in our lives.”

Harry also asked the little boy about his future, saying: “You live here in Auckland? Are you going to be a rugby player? You’re going to be an All Black?” referring to a New Zealand team.

Harry can relate to the little boy’s struggles as he lost his own mum Princess Diana 21 years ago.

The Duke and Duchess of Sussex’s 16-day tour across Australia, Fiji, Tonga and New Zealand is coming to an end.

The couple, who are expecting their first child together, recently arrived in New Zealand after spending a few days in Australia.

At the weekend, Meghan gave a moving speech as she visited Governement House in Wellington, New Zealand, for a celebration of the country’s 125th anniversary of giving women the right to vote.

Meghan – who has been known for her feminist views and activism for many years – praised the country for the “impact” its decision had on other country’s views on women’s suffrage.

She said: “We are proud to be able to join you tonight in celebrating the 125th anniversary of women’s suffrage in your country.

“The achievements of the women of New Zealand who campaigned for their right to vote, and were the first in the world to achieve it, are universally admired. In looking forward to this very special occasion, I reflected on the importance of this achievement, but also the larger impact of what this symbolises.”

Meghan also praised New Zealand once again for “paving the way” for women across the globe.

She concluded: “So bravo, New Zealand, for championing this right 125 years ago – for the women who well deserve to have an active voice and acknowledged vote, and for all of the people that this effort has paved the way for globally. We all deeply thank you.”

What did you think of Harry’s words to the little boy? Let us know by commenting on our Facebook page @EntertainmentDailyFix!