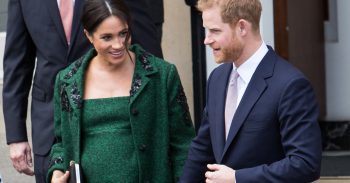 The pair couldn't attend the wedding for obvious reasons

But that didn’t stop them from reportedly splashing out on an incredible gift for the newlyweds, who tied the knot in a lavish three-day bash in Morocco.

According to the Mail On Sunday, Prince Harry and Meghan bought the couple an impressive piece of artwork by The Connor Brothers, aka British artists James Golding and Mike Snelle.

“Why fit in when you were born to stand out?” it reads.

The artists, who originally claimed to be Missouri-born twins when they first entered the art scene, shared a picture of the print on their social media accounts last year.

NEW PRINT RELEASE TODAY – Following our visit from amazing nine year old artist Belle Curran last week we have just released this image as a print. Belle suffers from interstitial lung disease. and needs a lung transplant. She is raising awareness about organ donation, and funds for the various charities that have helped her. The print is from a limited edition of 12, and all of the proceeds will be going to the charities that have supported Belle. The quote we have chosen comes from the children’s author Dr Seuss. We would be grateful for anyone who follows the link in our bio, and makes a donation. The print is available now through our website. please note that the prints will take up to 21 days for delivery

Idris and model Sabrina tied the knot in a secret ceremony in Morocco on Friday (April 26th), with their nuptials set to be featured in an upcoming issue of British Vogue.

Pictures of their wedding were posted on the publication’s Instagram account, with Idris, 46, looking suave in a custom Ozwald Boateng suit and Sabrina, 29, wowing in an off-the-shoulder Vera Wang dress.

Later in the day, Sabrina slipped into a V-neck style embroidered gown featuring pearls and gemstones.

Idris has been married twice previously – to Hanne Norgaard and then to Sonya Nicole Hamlin.

He has a 17-year-old daughter, Isan, with Hanne, and a five-year-old son, Winston, from his relationship with ex Naiyana Garth.

Speaking about the moment he proposed, Idris said it was the “most nerve-wracking thing” he’s ever experienced.

But he overcame his nerves and kept it “pretty romantic”.

Opening up about his love for Sabrina, he said they have “good chemistry”, adding: “She makes me laugh and we share common goals.